Shimla: Shortage of LPG cylinders has pushed rural folks to shift to burning wood not just to live through the cold but also for cooking purposes but those who have become desperate are not even hesitant to steal cylinders to over the crisis.

As the shortage has persisted for over a month, while black marketers are having a field day, even theft of a cylinder has been reported. 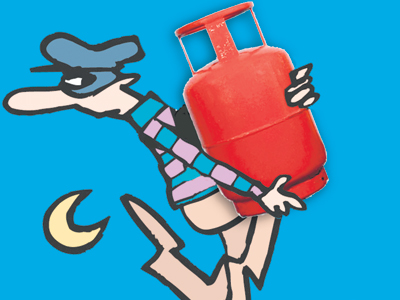 District police chief Sonal Agnihotri, reported an incident, â€œa housewife Suman Thakur has lodged a complaint at Chirgaon police station in Rohru sub-division that some persons after beating up her servant, have stolen a LPG cylinder from her house.â€

While the police are still to nab the culprits, elsewhere the going rate for a Rs 380 cylinder price is reported to be more than Rs 600.

Laying the blame at the central government door, chief minister Prem Kumar Dhumal told reporters that the gas supply was in short supply due to mismanagement of the union government. He also said that the states quota of kerosene had also been drastically reduced, which had only added to the shortages faced.

The government has been pressing Indian Oil Corporation to increase the supply as all districts were reporting a shortage, with consumers at some places not get a refill even after a 15 to 20 day booking.

Data with food and civil supply department revealed that there were about 13,33,000 gas connections in the state. Minister for food and civil supply Ramesh Dhwala, while acknowledging the scarcity let he media know, â€œBy conducting frequent raids, we are trying to ensure that no hoarding or black marketing takes place.â€

Facing the brunt, Rakesh Sharma, a resident of Kotkhai said, â€œgas shortage is forcing people to revert back to burning fuel wood both for cooking and heating.â€

Surinder Kashyap, a resident of Kumarsain lamented that with the winter cold setting in, the scarcity was more acutely being felt.

â€œTo save forests, first they encouraged use of LPG gas in homes and now when a lifestyle shift has come about, a reduced supply of gas cylinders has made life difficult here,â€ he said.