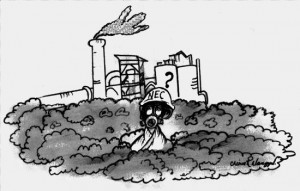 In all there were 6 petition filed by environmentalist and residents of Sundernagar opposing the project before the High Court.

The double bench of Justice Deepak Gupta and Justice Rajiv Sharma passed the order. Speaking for the bench Justice Sharma read out the operative part of the judgment and rejected the in principal environment clearance accorded to the project as well as the government notification for land acquisition for the cement plant that was allotted to Harish Cements.

He said, â€œthe courts order should make the government take a re-look at the urgency land acquisition provisions to acquire land, something which should be stopped for all projects as it was not only illegal but was being used to dispossess residents of their land holdings.â€

A proposal to set up a cement plant at Sundernagar was initially moved in 1989 but faced opposition right at the start.

However, a change of government in 1993, saw signing of an memorandum of understanding for setting up a 1 million ton capacity cement unit with Harish Cements in 1995.

The proposal was shot down by the ministry of environment and forestry on the grounds that it was too close to a wildlife sanctuary.

Plans were redrawn to reallocate the plant and the controversial project obtained an in principal environment clearance in 2005. This infuriated residents and the green lobby, who challenged it in the courts as the mandatory public hearing to register peopleâ€™s objections over the mining area was allegedly not conducted.

An RTI query revealed that then union minister for forest and environment, A Raja had waived of the mandatory public hearing on the recommendation of chief minister Virbhadra Singh about â€œlarger public and national interestâ€ involved made on 29 March, 2005.

While the matter was pending with the courts, the state government started land acquisition process and sources in the industry department revealed that a mining lease for 725.857 hectares was signed with Harish cement on 15 January, 2007 of which 469.68 hectares was forest lands and the rest was private lands.

Meanwhile the cost for setting up the plant had escalated from Rs 400 crore to Rs 1200 crore and in lieu of the forest land involved the company is also said to have deposited Rs 21 crore as net present value of the forest diversion on the mining land to be used for the project.