Shimla: To the theme of ‘Save Water, Every Drop Counts’ it was Versah Bhardwaj of DAV Lakkar Bazar who was declared best artist for the painting competition held for students of Class IV, V and VI to mark the Children’s Day here today.

In second position was Purna Prajapati and Mehar Raina of Delhi Public School, Jhakri. While the winner was handed a Rs 10,000 cash award, the second and third prize had a Rs 8000 and Rs 5000 cash award.

Besides the three winners, there were 10 consolation prizes of Rs 1000 each were handed out. 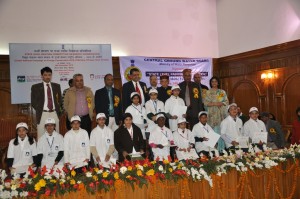 Organized as a state level Painting Competition “National Awareness Campaign on Water Conservation-2010” under the aegis of Ministry of Water Resources, 50 participants were invited for the competition after a selection process, by SJVN, the power generating company which was the nodal agency appointed to conduct the competition.

Winner of the competition would be participating at the National Level finals to be held at Delhi on January, 2011.