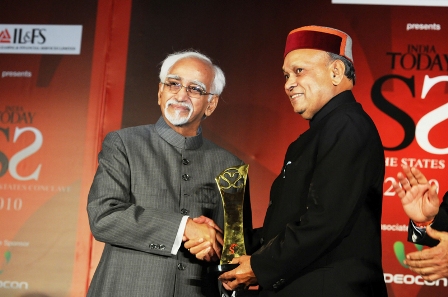 Shimla: For the â€˜State of States survey â€“ 2010 conducted by the reputed India Today media group, Himachal Pradesh has bagged the Best State award among big states in the overall performance category for the first time.

On behalf of the state, chief minister Prem Kumar Dhumal received the award at an impressive ceremony at Delhi today that was presided over by Vice-President Hamid Ansari.

Speaking on the occasion the chief minister said that the government had focused its developmental agenda towards rural areas to ensure that the common man benefited from the government programs first.

The survey adjudged the state best in education, investment and macro economy. In agriculture, governance, infrastructural development and consumer markets the survey placed it among the the top states in the country.

While the survey put the hill states annual growth at 8.1% which is at par with highly industrailised states of Maharashtra, Himachal was also declared at top in housing development programs and was described as a role model in overall development in entire India.

The chief minister let the gathering know that to the disadvantage of states, the central government was concentrating all powers in its hand which was proving detrimental to federal structure of the country.

He said that 13th Finance Commission had grossly miscalculated the committed liabilities like pay, pension and interest, which had put the state in to a great loss.

While every state in the country secured an enhancement of around 125 percent in revenue from the 13th Finance Commission, for Himachal it has only been 50 % increase in its revenues which was lowest among all the states in country. The centre should not discriminate on political considerations, he said.