PALAMPUR: Mr. Justice Joseph Kurian, Chief Justice Himachal Pradesh High Court today asked the investigating agencies to be more careful, cautious and effective while conducting the investigation and collecting evidences in the criminal cases so that it could lead the trial to the logical end and accused were punished in accordance with the law. He said investigation agencies play very important role in the administration of justice, therefore they had to be more responsible.

Justice Kurian was inaugurating two days workshop on NDPS Act and other Acts organized by the HP State Judicial Academy here. Over one hundred officers from Judiciary, police prosecution, forest and forensic departments were participating in the workshop. He said there should not be any laps on the part of investigating agencies, they must establish the charge while filing charge-sheets in the court and should assist the court in best possible manners.

Speaking on NDPS related crimes, he said police, investigating agencies and courts had to play constructive and effective role to eliminate the drug mafia. He stressed the need for social audit for system of legal functioning so that people could develop their faith in the system, there should not be any impression in the public that courts were only meant for punishing the people. This concept, mindset had be changed and public should make conversant that court were to protect their rights also. He also sought the cooperation of public in this filed for assisting investigating agencies.

Justice Kurian said in present system police needed to modify its procedure and conduct also while handling the criminal cases, material evidence collected during investigation on which the particular case stand had to be placed in the courts intact, so that courts could do justice in the performance of their duties.

He said at the same time the court must play proactive role while delivering the justice. He expressed concern over the piling up of cases in the courts and stressed for timely disposal of cases in the subordinate courts. He quoted that 67 lakh cases were pending in lower courts of the state. Likewise over forty five thousand cases were also pending in the High Court. 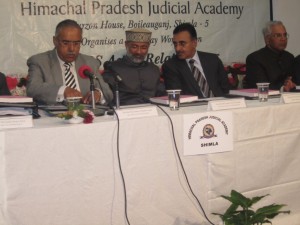 young generations. He expressed grave concern over a figure provided by a local NGO that over thirty percent schooling going students belonging to middle class family were turning drug addicts. We must prevent them and save their lives. He said he had also planned to involve excise and medical department in such workshop who could suggest measure to save the youngsters from drug addiction. He said in NDPS cases the conviction rate was only 39% which was matter of worry, how 61% accused were acquitted, it was also because of failure of investigating agencies while collecting the evidences. Police, prosecution and judiciary had to think over these issues. He said menace of narcotic also lead to bigger crimes like terrorism which was major challenge to the society.