Thousands of greylag geese, mallards, teals, pochards, wigeons, shovellers, gadwalls and coots can be seen leaving the Hokarsar, Mirgund, Hygam and Shallabugh bird reserves in the evenings these days. 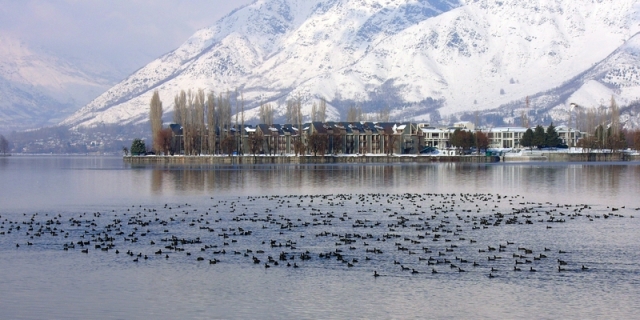 “For natural feeding after the water in the reserves is frozen, Wullar Lake is one famous feeding destination,” Baba told IANS.

He added that the migratory birds return to the reserves in the mornings.

Last year, due to extreme winter, the wildlife department had to arrange artificial feeding for the migratory birds in the Hokarsar bird reserve, 12 km from Srinagar.

“This sometimes becomes necessary because the birds are unable to fend for themselves in frozen water bodies. We arrange stocks of paddy, which is thrown towards flocks of migratory birds in the reserves. Birds remain huddled together in small pools of water during extreme winter freeze”, Baba said.

It is estimated that there are 400,000 migratory birds in the Shallabugh bird reserve, 100,000 in Hokarsar and around 10,000 in the Hygam bird reserve, according to figures available with the wildlife protection department.

“A majority of greylag geese come here in February. Some of the more endangered bird species like cotton teals, tufted ducks and Brahminy ducks have not arrived yet and we are expecting them in February”, Baba said.

In February 2009, Shallabugh had hosted over 5,000 greylag geese, a record number for one reserve.

Officials of the wildlife department admit there could be poaching of migratory birds in unprotected areas, but say that stringent measures are in place to check it.

“Bird shooting is banned under the Jammu and Kashmir wildlife protection laws. Poaching has been wiped out during the day. Because of a shortage of ground staff, we cannot say night poaching of birds has been completely stopped,” Baba admitted.

The wildlife warden also spoke of human interference by encroachments, shrinking water bodies and expansion of human habitats as potential threats to wetland reserves of the valley.

“A wetland reserve is a biosphere, which needs protection, like any other living biological system. Unless properly protected, biological systems like our water reserves are liable to perish. It is the duty of every Kashmiri to protect this lofty heritage by supporting its survival in whatever way possible,” Baba said.