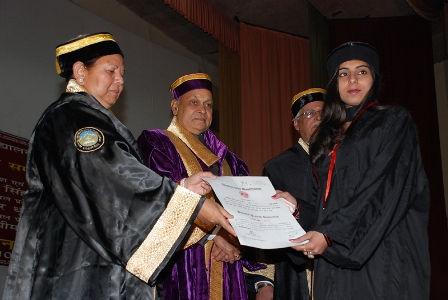 Shimla: Governor Urmila Singh conferred doctorate degrees and gold medals upon 215 students at the 18th convocation of Himachal Pradesh University that was held today. Chief minister Prem Kumar Dhumal was the chief guest for the occasion.

Speaking on the occasion Urmila Singh who is also chancellor of the university stressed upon the need to breakout for watertight compartmentalisation of education system by taking to interdisciplinary studies.

Appreciating the university for reserving a seat for single girl child in educational institutions, she said that the government was empowerment of girls through education and had provided for free education to them right up to the highest level.

Chief minister Prem Kumar Dhumal, who was the chief guest for the occasion, in his convocational address said the government by earmarking Rs 2567 crores for education sector was spending over 17 percent of the current year’s budget on education.

Besides the 321 degree and vocational colleges, there were over 16,000 educational institutions in the state, he said.

A central university at Kangra and an IIT at Mandi will bring about qualitative changes and Himachal Pradesh University by preparing a vision plan would set out targets and academic goals that the university hoped to achieve in the coming years, said the chief minister.

Vice-chancellor Sunil Gupta, in his welcome address drew attention to the universities vision plan under preparation that targets to make the university a centre of excellence in higher learning.