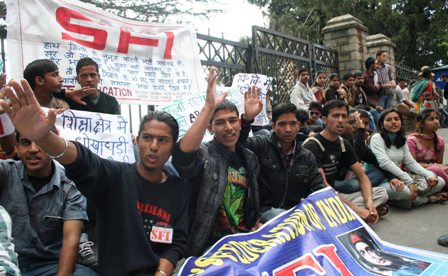 Shimla: Fearing a fake certificate racket, Himachal Pradesh University was quick to institute an in-depth enquiry into whole process of printing, preparation and delivery of certificates by the examination branch just as one case of one fake mark sheet has surfaced.

Vice-chancellor SK Gupta said, â€œa three member committee headed by dean of studies CL Chandan has been constituted to look into all aspects of preparation and delivery of certificates and degreeâ€™s.â€ He added that they have given 15 days to submit the inquiry report.

University spokesman Ranvir Verma said that the authorities were alarmed when one Parvati Devi produced a BA II pass mark sheet that on account of security features and original results did not match the records of the examination branch.

He disclosed that the paper used for the mark sheet was not one used by the university and the computer bar codes attached to the document did not match up.

University sources however, claimed that the dubious document does contain a rubber stamp marking of the examination branch.

Not satisfied with the girls explanation of how she obtained the document, the vice chancellor office had has handed over the fake certificate along with other relevant records to the state CID for instituting a probe into the matter.

A preliminary enquiry report by the controller of examination indicates that the certificate submitted by Parvati Devi is a fake one on account of missing security features and differs from the university records, said Gupta.

While sources maintained that much of the universities marks entry system in the records was a hand written process, the vice-chancellor said, â€œthe examination branch follows a double entry system, wherein computers as well as hand written records of marks and results are maintained.â€

The case of a solitary fake certificate turning up at the university has set alarm bells ringing in the university and the government for it was a similar case about a class X boy, found flaunting a pass certificate without having appeared for the HP School Education Board examination that unearthed a major scam in the school examination system and has discredited the board.

Investigations so far have revealed that over 200 students from class VIII to class XII did obtain board certificates without appearing for the exam. Thirteen people, who include operators of private educational centers and board employees, have been arrested in the case.