If governors are going to behave as representative of a political party and act in a partisan manner then there need not be such an office, he said. 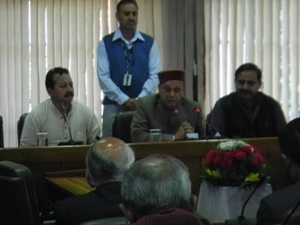 Talking to newspersons the chief minister said â€œWhen governors begin to behave in such a manner, the President of India needs to intervene and re-call them.â€

Condemning the behaviour of the Karnataka governor in no uncertain terms, Dhumal asked the UPA government to stop playing dirty games against democratically elected state governments as it was damaging the countryâ€™s federal structure.

Without mincing words, he said that it was for the first time that the BJP had an elected government on its own in a southern state, which the UPA government was unable to tolerate and was making attempts to dislodge it through undemocratic step with the help of the governor.

â€œThe Congress talks about morality in politics but the nation has not forgotten the scruples manner by which it manipulated a majority in the Lok Sabha in the pastâ€, he pointed out.

Pointing out the case of Bihar and Jharkhand, Dhumal said that whenever the Congress is in power at the centre it encouraged defections so as to dislodge democratically elected governments on many an occasion.

â€œThe anti-defection law was enacted to prevent defection and ensure that those elected follow the programmes and policies of the party on whose symbol they stand elected.

For a person who having been the law minister of the country and who did allow de-freezing of Quattrochiâ€™s accounts in the Bofors case, the Karnatakaâ€™s governors past is littered with many controversies, said Dhumal.