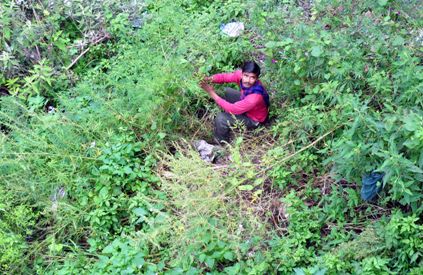 Shimla: While the police struggle to enforce the Narcotic Drugs and Psychotic Substance (NDPS) Act in the state, photographer Amit Kanwar today trapped on camera this unknown man at work at Kufta Dhar near Shimla, rubbing marijuana leaves to extract the resin for making â€˜dopeâ€™ or â€˜charasâ€™.

Marijuana plants grow in abundance in the wild in the state, which the authorities find hard to uproot or chemically destroy but the crop used to be cultivated traditionally in many parts of Kullu valley and elsewhere for making shoes and ropes from hemp extracted from the plant.