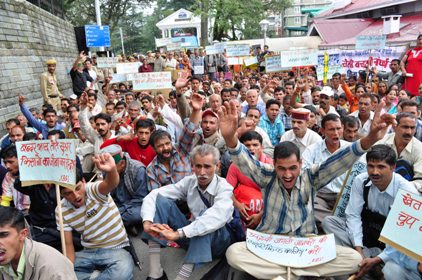 Shimla: Protesting against government failure to provide protection to crops from burgeoning population of monkeys and other wild animal, hundreds of framers under the banner of Kheti Bachao Sangarsh Samiti today marched to the Vidhan Sabha to hold a demonstration.

Speaking about the immense loss to crops being caused by vermin populations of wild animals Kuldeep Tanwar, president Himachal Kisan Sabha demanded lifting of ban of export of monkeys, scientific culling of wild animals to ensure their populations at levels of carrying capacity of the areas identified, providing crop insurance for all crops, compensation for animal damage to crops and bringing watch and ward man days of farmers used to protecting crops under National Rural Employment Guarantee scheme.

He said the central government needed to address farmers concerns by bringing wild animals especially monkeys under section 62 of 1972 Wild Life and Animal Protection Act for being declared vermin.

The Himachal Kishan Sabha (HKS) holds that the farming community was losing about Rs 2,000 crores annually because of outgrown animal populations in the state that not only had rendered much land fallow but also used up much manpower for watch and ward purposes and despite that standing crops suffer extensive damages.

“A 2004 cenus had put the monkey and baboon population in Himachal at about 3.7 lakhs and current estimates project it to have increased to 5 lakhs but a government sterilization program for containing the simian population since 2006-07 has only been able to sterilize 19,481 monkeys,” said Tanwar.

At this rate the population would take half a century before some result could become visible, he added.

Of the total 3243 panchayats in the state as many as 2,301 panchayats were affected by outgrown simian populations, he said, adding that at least 50,000 hectares of land was rendered barren because farmers had stop cultivating it due to the animal menace.

Vijoo Krishnan, joint secretary of the All India Kisan Sabha stated, “AIKS will take up the issue of the lifting of ban on export of monkeys at the central level as well”.

Later a delegation led by Kuldeep Tanwar met chief minister Prem Kumar Dhumal and presented a charter demanding that a resolution be passed in the present session for lifting ban on export of monkeys; convening an all party meeting on this issue; a fresh census of the population of the wild animals, monkeys and stray cattle be got done and also a survey be conducted about loss to crops; adequate representation to the kisan organizations be given under the national and State Wild Life Board and a change in the breeding policy and check corruption in ‘Gau Sadans’.