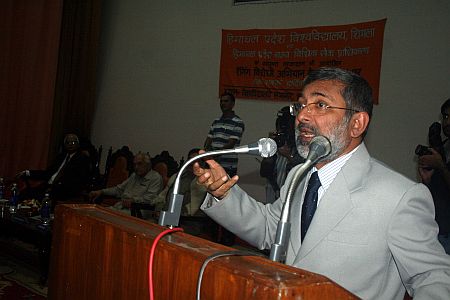 Shimla: Asking the student community to abhor violence, chief justice of Himachal High Court, Joseph Kurian today said that campus of an institution of higher learning is where order needed to prevail for grooming young people into responsible citizens and ideally there should be no role for the police in such a place.

Launching a statewide anti-ragging campaign from Himachal Pradesh University, the chief justice said that ragging was also an outcome of disorderly conduct and campus violence.

Observing the large presence of police personnel deployed at HPU for maintaining law and order among warring students outfits, the chief justice asked the students community that with there being so many places where police presence was required, is this the place where they should be?

Students of all political formations needed to put their head together to make the campus a violence free place he said.

It was ironic that teachers, who are counted as fountain heads of knowledge Guruâ€™s, had a liquor brand named after the community that was openly advertised along highways, he said.

In a democracy, every section only talked about rights but none advocated the duties of being a responsible citizen, said Justice Kurian.

Earlier DS Manhas, Director General Police (DGP) in a talk on the occasion said that the state government had a policy of zero tolerance towards ragging but the case of Aman Kachru in the name of ragging went against the grain of state polices.

After the Kachru case from Tanda Medical College, Kangra, no other major case had been reported in Himachal, he said.

However, he mentioned that in the past ragging cases had been reported from HPU also besides the existing professional colleges in the state. There is nothing like good, bad or acceptable and unacceptable ragging, he added.

Citing a survey done by a NGO, the DGP said that in 2009-10 there were 19 deaths during ragging reported and also there were 4 attempted suicide cases reported that were triggered by ragging. In all there were 164 ragging cases reported of which 56 cases resulted in major and minor injuries and 19 cases involved forced consumption of drugs or alcohol.

Pointing out the legal position, the DGP said that the law had been made stringent so as to desist people from indulging in it. Those convicted for ragging could end up with Rs 50K fine and 3 years in jail for such anti social and anti human activities.

Among other Justice RB Mishra and education minister ID Dhiman also spoke on the occasion.

First of its kind the anti-ragging campaign has been launched by HPU in collaboration with HP State Legal Services Authority who have opened an helpline and an email for reporting ragging. The police have opened a SMS gateway that is manned on a 24/7 basis.