Shimla: A major fire in the crowded Lower Bazaar area of main city was averted after firemen managed to contain the flames but not before three shops were gutted in the accident that occurred at about 1.30 a.m.

Deputy commissioner JS Rana said that two shops were fully burnt and one partially burnt in the fire accident. 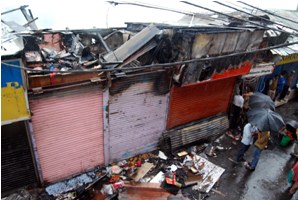 The fire was contained with 2 hours of reporting, he said.

The damage is believed to be in several lakhs though the total loss was yet to be assessed.

Short-circuiting is suspected to have caused the accident, though the matter is being investigated, said Rana.