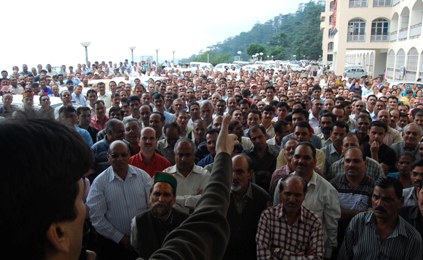 Shimla: Not pay commission arrears, or anomalies in pay structure but it is adoption of newer technology that is in the eye of the storm of government employees at the secretariat here, as the newly installed biometric machines disturb a laid back order and ensure reporting for work on time.

A lunch break employee union gate meeting, called on Friday (16th July) to demand for release of pay arrears and point out discrimination in house rent allowance among lower and higher categories of employees, turned out to be one at which speaker after speaker spoke against the harassment the biometric machines had become.

As Manmohan Jassal, president secretariat employees union, started raising the regular demands, a women employee interrupted his speech and asked the leader to settle the issue of usage of biometric machines for marking presence.

Raising her voice above the crowd, she said â€œWhereas all of us are reporting for work by registering our finger imprints on time at the biometric machines, senior IAS officers are not doing so and the union has failed to lodge a protest in the matter.â€

Joining the issue another said, â€œeven a two minute delay at reporting time has to be made up by working an extra half hour in the evening.â€

Soon others joined in and the 20 minute meeting discussed nothing else but the machines.

Jassal said the machines had become an harassment for the employees, Rajinder Sharma, general secretary of the union said that they had a software problem and still another leader demanded that the secretariat administration make a disclosure as to how many officers reported and left on time as per the biometric machine records since were installed.

The meeting disbanded after resolving to boycott the machines on 2nd and 3rd August, unless the machine software was not made more flexible, the officers also be asked to report at the machines and their reporting time since June be disclosed. The employees have sought intervention of the chief minister in the matter.

While chief secretary Ahsa Swaroop, who was instrumental in introducing the technology, maintains that have been installed to improve work culture, Ajay Bhandari principal secretary secretariat administration said that after spending so much money, the reform cannot be undone.

Meanwhile, emboldened by the results of the new attendance reporting system, the government has drawn up plans to expand installing the technology at IGMC Hospital, state electricity board headquarters and other offices that have a large force of employees.

On opening day, 1st June, Abhay Shukla, additional chief secretary, was among the first to log in at 9.52 a.m. at one of the 12 machines that were installed to record the incoming and outgoing timings of 32 IAS, 14 HAS officers, 58 class I officers and about 1,400 other employees.