Shimla: Marking a shift from regular to contract jobs has doctors, teachers and others up against the governmentsâ€™ recruitment policy, causing much unrest among the aspirants. 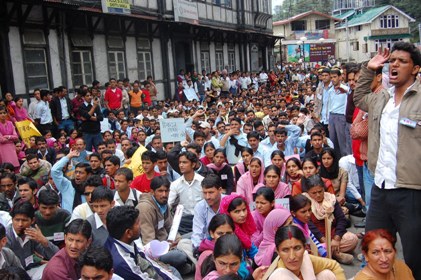 Junior basic teachers (JBT) trainees are out agitating over the government unwillingness to sign bonds with them for providing regular jobs. So are doctors who have contract appointments or have been recruited by hospital societies Roghi Kalyan Samithiâ€™s (RKS).

Spearheading the JBT agitation Chander Mohan Negi says, â€œSince 1996 all JBT trainees did fill bonds during training itself about regular jobs but it is being denied to our batch.â€

Despite recently having held a protest demonstration outside the state secretariat, one student having committed suicide and some having resorted to a fast unto death protest, the government is unmoved.

â€œThe government has framed a contract recruitment policy,â€ says ID Dhiman, the education minister. The government has assured jobs to the JBT trainees, he said adding, but by committing them regular jobs and asking them to fill bonds would be going against the policy as well as discriminatory and unfair to others.

A month ago the government changed the recruitment policy for doctors, making it mandatory for them to complete 6 years of contract services before being appointed medical officers of the state government. Doctors falling in the ambit have been protesting their recruitment procedure by resorting to holding clinics outside the hospitals. 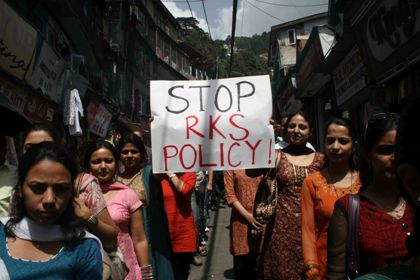 With talks about regularizing the services of doctors after having served for two years on contract basis having failed to resolve, the agitating doctors have decided continue with the protest.

Dilbagh Singh, president of contract and RKS doctors committee said, â€œfor another 10 days we will continue to hold clinics outside the hospitals and should the issues not resolve, the stir would be intensified.â€ They have even threatened to resign en mass.

Responding to the doctors demand, Rajiv Bindal, health minister let a section of the media know, â€œgenuine demands of the agitating doctors could be considered.â€ He said whatever decisions had been taken; they were in the interest of public health.