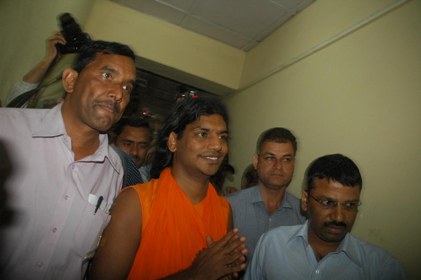 Shimla: Self-styled godman Swami Nityananda, who on 21st April was arrested by Karnataka Police from Arki, in Kandaghat area of Solan district, is granted bail by Karnataka High Court.

He was arrested on criminal charges including rape. The Swami had shocked followers, two months back after a tape showing him getting intimate with a popular Tamil actress which was aired by Sun News channel in south India.

Nityananda has to furnish a Rs.100, 000 bond, give no public discourses, surrender his passport and report to the police once in a fortnight.

Earlier on June 8, the High Court had adjourned the bail application hearing of Nityananda till June 10.