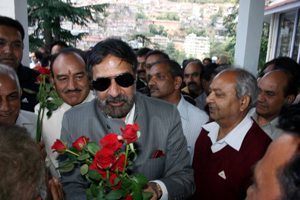 Shimla:Anand Sharma, Commerce and Industry Minsiter, whose term in April as Rajya Sabha member came to an end from Himachal Pradesh will be re-electedon June 17 from Rajasthan.

Though, his nomination process took many bounces to take a halt at Rajasthan. The Congress first tried to accommodate him from Maharashtra. But stiff resistance from its Maharashtra unit saying if tickets for the locals were denied for Sharma, it would give a missile to Raj Thackerayâ€™s Maharashtra Navnirman Sena and Bal Thackerayâ€™s Shiv Sena to rake up the Marathi manoos issue, forced the Congress to look for some other place for the minister. The Haryana unit also resisted that there was only one seat coming for election from the state and there would be a revolt in the party if an â€˜outsiderâ€™ was nominated. So, Anand Sharma was move and finally accommodated by Rajasthan.

While a section of the party had raised questions of propriety and suggested privately that Sharma would step down until he got re-elected, the party leadership told him to continue in his chair. Therefore, Sharma had been continuing as a minister without being a member of Parliament for the past two months.