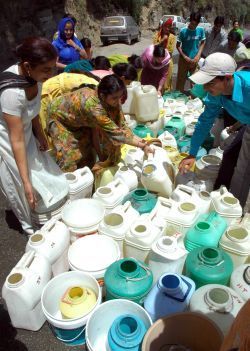 Shimla remains a favoured summer destination for those intending to head for the cool climes but as the tourist season has picked up, so have the cityâ€™s water problems.

While influx of touristâ€™s means booming business for hotel operators but it has also significantly increased consumption of water.

A cursory survey of city hotels revealed that on an average, a medium sized budget hotel consumed as much as 10, 000 litres of water in a day.

While the demand for water is peaking but against an installed supply capacity of 41.45 million litres per day (MLD) the Irrigation & Public Health department was only able to supply 38.3 MLD.

Sources in the Shimla municipal corporation attributed the shortfall due in supply due to water availability reducing at the sources an old leaking supply network, parts of which were laid by the British over a hundred years ago.

Some installations such as the Seog Catchment Area and Cherot Nallah are over 120 years old, says Vijay Gupta, an assistant engineer with the Municipal Corporation.

He said that to supply water to the entire hill city about 6 water lifting stations had been installed.

Passing the buck about shortages being faced, Gupta said that the MC was only responsible for last mile distribution of water whereas supply was being handled by government department of Irrigation & Public Health (IPH).

The engineer informed that a proposal had been put forth before the government about augmentation of the River Giri water supply scheme for the city.

Augmentation of this additional source could yield another 50 MLD of water and another 4.54 MLD of water could also become available once construction of the Nauti Khad (Gumma 3rd) project costing Rs 9 crore is completed by the IPH Department.

While plans are drawn to meet increasing demand and tourist carrying capacity steadily rises, water shortages for this summer getaway tourist destination are here to stay for now.