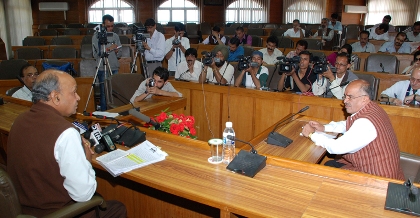 Shimla: Looking for an out of court settlement that the Supreme Court has asked the central government to attempt arriving at over division of assets following execution of the Punjab Re-organization Act 1966, chief minister Prem Kumar Dhumal said that Himachal state was still to get its due share as a successor state from projects managed by Bhakra Beas Management Board (BBMB).

Speaking to reporters, the chief minister said that the state has been demanding 7.19% share in the 1380 MW Bhakra-Nangal project, 990 MW Beas unit I project (Dehar) and 360 MW Beas Unit II project (Pong) project, which was arrived at on the basis of the â€˜population ratioâ€™ of transferred territory in terms of the said Act.

Other than that the state was seeking 12% free power as compensation towards the distress caused to the state due to setting up of these projects and also for permanently surrendering potential generation sites.

â€œIn all about 530 MW was the due share from the BBMB projects,â€ he said.

Blaming the congress for not having defended the successor state rights, Dhumal said that when the Punjab Re-organization Act was implemented, there was a congress government both in the centre as well as the state.

While even the union territory was given 3.5 % power from Bhakra dam project, Himachal on an ad hoc basis was given 2.6 % from the mega project. The host state was being given just 15 MW power on ad hoc basis from Dehar project and nothing from Pong Dam project, said the chief minister.

He added that though there was several union government documents itself clearly showing that present allocation of rights and liabilities from Bhakra Nangal & Beas projects amongst successor states was only an ad-hoc arrangement and was subject to final determination, which included recommendation of one man KS Subrahamanyam committee constituted by the central government in 1978, but the central government had attempted to disown it in the court.

The Subrahamanyam committee too had recommended that HP government should be allocated 7.19 % share in Beas projects on the basis of population ratio, he said.

However, the union government had not taken any action of these recommendations, said Dhumal.
Ends