Shimla: Thousands of Aaganwari workers today marched onto the Himachal Pradesh secretariat and blockaded the government offices for over three hours, demanding acceptance of their demands which included upward revision of pay and allowances. 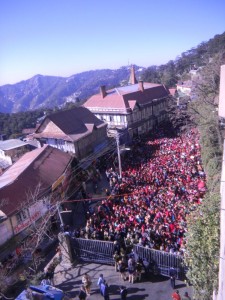 Speaking to the gathering that was stopped by riot police at the secretariat gate general secretary of the organization, Saroj Sharma and others demanded immediate release of arrears of workers and helpers.

They also sought parity in pay and allowances with the governments of Punjab, Uttrakhand and Haryana for the current financial years. 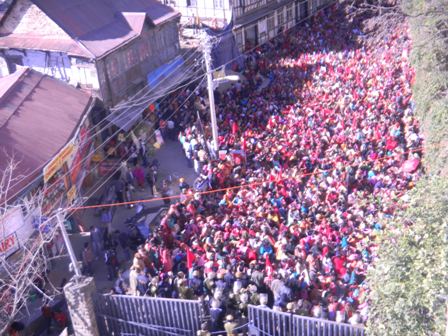 In consonance with directions from the central government, protesters sought for constituting of a â€˜welfare fund for Aaganwari workersâ€™ that would provide them with pensionary benefits after retirement.

The protesting women demanded 90 percent reservation for their upgradation as ICDS supervisors that had been reduced to 50 percent by the government.

Kashmir Singh Thakur, general secretary CITU said, â€œit is one of the largest gathering of Aaganwari workers in the capital demanding their dues, which the government had failed to release till date.â€

There are about 18,000 Aaganwari workers in the state providing part time employment to about 36,000 women, who are entrusted with tasks ensuring health and nutrition mothers and new born in the rural areas.

The monthly wages (honorarium) handed out to a Aaganwari worker is Rs 1800 and that to a helper is Rs 1250, which is lower than the prevailing minimum wages, said Thakur.