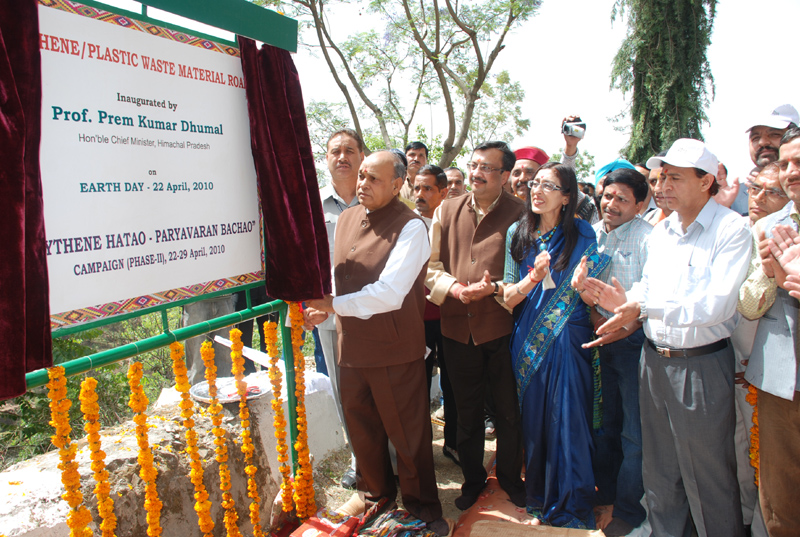 Shimla: To clean up the plastic mess in the hills, chief minister Prem Kumar Dhumal on Earth Day announced a buy back scheme for waste from urban local bodies that would be recycled into material for road surfacing purposes.

Speaking at the launch of a â€˜Plastic Hatao â€“ Paryavaran Bachaoâ€™ campaign, the chief minister said that the plastic waste would be bought at Rs 3/- per Kg and an additional rupee would be given as handling charges. He added that Himachal would be the first state in Asia to start such a scheme.

Other than starting a â€˜Green Journalism Awardâ€™ the chief minister said that the government had also decided to panchayats and other urban bodies for contributing towards environment and preserving ecology in their respective areas.

Financial incentives would be given to individuals also who assist in proper collection of waste plastic, he said.

He said that during the first phase of the â€˜Plastic Hatao-Paryavaran Bachaoâ€™ campaign in December last year, a total of 140 tonnes of plastic waste had been collected.

On the occasion chief secretary Asha Swarup said that out of the total collection of 1200 to 1500 tonnes of solid waste 50 to 60 tonnes contained plastic waste only. She said that cement factories were being motivated to incorporate solid waste management mechanism into their plants to generate electricity out of the plastic waste for their consumptive use.