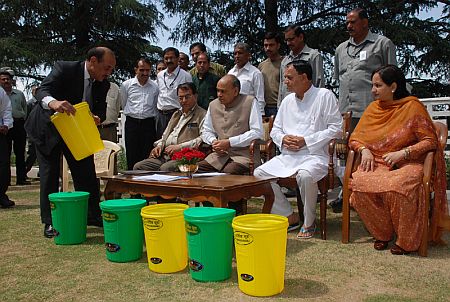 Shimla: Similar to many countries even Himachal Pradesh Government has taken an initiative to manage waste. Himachal Pradesh was the first state in India to ban the production, storage, use, sale and distribution of small polythene bags in June 2004.

Now, Himachal govt. takes another step to beautify and conserve environment by Waste Management, for which Shimla Municipal Corporation has introduced ‘Door to Door Garbage Collection Schemeâ€™ for Shimla town. Chief Minister, launched the scheme from his official residence, Oakover on Friday.

Speaking over the occasion Dhumal said that â€˜Shimla Environment, Heritage Conservation and Beautificationâ€™ (SEHB) Society had been constituted under the aegis of Municipal Corporation, Shimla to implement the scheme.
Under this campaign against a security fee of Rs. 50 every household will be provided yellow dust bins for non-biodegradable waste, i.e. plastic, metal, stone etc. and green dust bins for bio-degradable waste, i.e. raw and waste food stuff, paper etc. In addition to this every household would be paying Rs. 50 per month as garbage collection charges to authorised municipal employee who would be visiting every registered household to collect the garbage.

Waste management is the collection, transport, processing, recycling or disposal, and monitoring of waste materials. The term usually relates to materials produced by human activity, and is generally undertaken to reduce their effect on health, the environment or aesthetics. Waste management is also carried out to recover resources from it. Waste management can involve solid, liquid, gaseous or radioactive substances, with different methods and fields of expertise for each.

Waste management practices differ for developed and developing nations, for urban and rural areas, and for residential and industrial producers.

Apart from the waste management campaign – â€˜Revival of Deodarâ€™, a special tree plantation campaign had also been launched to increase the green cover in the town in association with various local and volunteer organizations, he added.