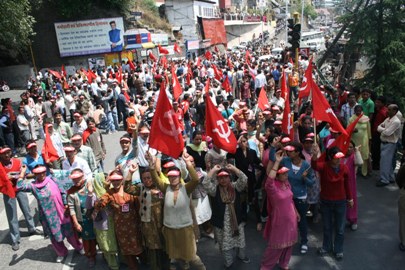 Shimla: Protesting against price rise and steep hike in bus fares, hundreds of CPI (M) workers court arrested in a state wide agitation today, disrupting traffic and throwing normal life out of gear at many places.

Leading the agitation in the state capital, CPI (M) general secretary Rakesh Singha was among those arrested in Shimla.

Police had a difficult time in regulating traffic and maintaining law and order. District police chief RM Sharma said that 254 people had been taken into preventive detention and another 6 were arrested for damaging public and private property, which included deflating tireâ€™s of vehicles, indulging in wall writing and other offenses. 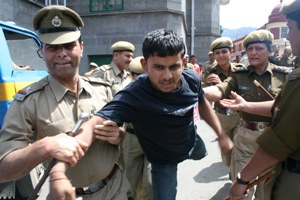 Reports of protesters participating in the agitation were received from districts of Mandi, Kinnaur and Sirmaur and well as other parts of Shimla district which included Rampur, Rohru, Theog and Chopal townships.

A road blockade that was resorted to early in the day at the main bus terminus, disrupted traffic, causing much trouble for children to commute to school and for office goes to reach their work place. Milk, bread and newspapers distribution was also affected, which reached late.

Terming the agitation a success that had receive wide support from the people, Singha later claimed that more than 6,000 had offered arrest in different places of the state.

He said, â€œthe BJP government by shifting the blame over rising prices onto the central government only showed that it lacked political will to confront the issue and bringing down prices by strengthening the public distribution network.â€

He said that agitation would be intensified unless the state government did not immediately withdraw the 25 percent bus fare hike.

â€œCommon manâ€™s movement has been restricted after stiff increase in bus fares and they are indeed angry about it,â€ he said. Should the government not withdraw the hike, we will intensify the stir, added Singha.