It was early May.  We had camped overnight at Shangar, a deodar encircled saucer shaped meadow, on our way to Lapah, the last village before one enters the Great Himalayan National Park. “Beautiful”, the word got repeated in intonations from sing-song to grave to exuberant.

Our motley, urban crowd, on a summer retreat, was beginning to take in and breathe the unspoiled natural wonder.  Cameras clicked regularly.  In the distance snow capped peaks glistened in the morning sun against the backdrop of a pure blue sky.

The trek to Lapah, winding gently uphill along the mountain folds, had our group break into twos or threes; chatting, taking pictures, squeals of laughter emanating now and then, stopping to stand and stare at the Irises that bloomed in their thousands along the cooler recesses of the hillside. An enthusiastic, athletic couple with binoculars slung around their necks, dashed up and down, slipping / tripping/ steadying and occasionally letting out an excited “Look at that” on espying a bird dart amidst the tall, dark fir and spruce trees. 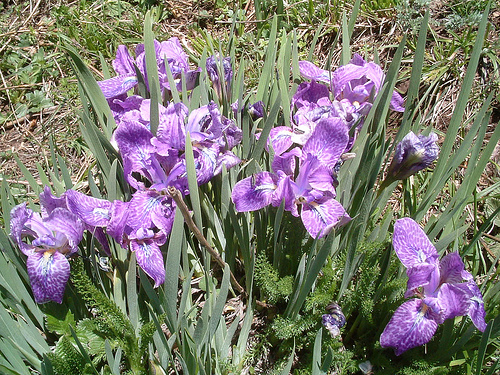 Some clouds were billowing into enormous castles of light by now and the constant refrain of elusive barbets rang in the ears till it all got coded permanently into memory. The sights and sounds of GHNP were beginning to register.

As the way rose up towards Lapah, the meadow of Shangar fell below, a shrinking patch of light green amidst the expansive, dark green conifer forests.  There the previous night circling a bonfire, our group, somewhat startled by the clarity and apparent nearness of the constellations above (something you never get to see in Delhi), were thrilled to learn and recall names like ‘Man of Orion’ or “Ursa Major” (The Great Bear).

When shown how these point to the North Star, a colleague, by now having lifted his spirits high enough (with a couple of shots of rum), rose unsteadily to his feet (his legs stiff with the day’s uphill walking from Neuli), and loudly declaimed, “for I am constant as the Northern Star of whose true fixed and resting quality there is no fellow in the firmament”! “You mean around this fire, Julius Caesar?” someone interjected. Laughter!

“Kuch gana ho jaye”; the ladies stared at their feet and the men, in near unison, exclaimed “I can’t sing for nuts”! Our porters, bunched at one side of the bonfire were, however, ready with a ‘dholak’ and local numbers which sang of the forests, the meadows and a shepherd’s joys and sorrows, pining for his beloved, still months away.

Our Julius Caesar having further lifted his spirits by now suddenly rediscovered his musical talent and soon the group was singing with him, each wanting to group sing their favorite, half forgotten oldies. As the singing rose and fell, group members in ones or two’s, yawned and drowsily headed for their tents. In the heavens above the stars shone brighter than ever.

As the trek progressed, group members full of ideas of how to boost eco-tourism in the area, tentatively selected sites where their ideas could materialize. While someone thought of pitching tents on rocky overhangs, others recommended provision of horses or ponies for the urban heavy and yet others wanted the path improved to allow mountain cycles to ply. Local songs and dance in the evening at the Shangar tent site would be a great attraction and source of income for villagers. “What about local food?” the bird watcher thought aloud.

Our local porters listened intently but said that only foreign visitors paid well while the Indians were stingy and reluctant to buy local handicrafts. Also, the porters confided, there was a flourishing, illegal hashish economy in many areas around the park but villagers never mentioned this to the authorities.

Our group reached Lapah late in the afternoon, less tired than the previous evening, but nevertheless looking forward to lying down and relaxing. With the ladies cramped into the tiny one room forest inspection hut, the men got busy cleaning, rubbing salt with lemons into a freshly slaughtered, de-skinned goat. The idea being to bar-be-cue it whole over a charcoal fire and keep slicing juicy pieces as the goat cooked, just like Red Indians did in comic books. Only none of us could dance like Haiwatha! 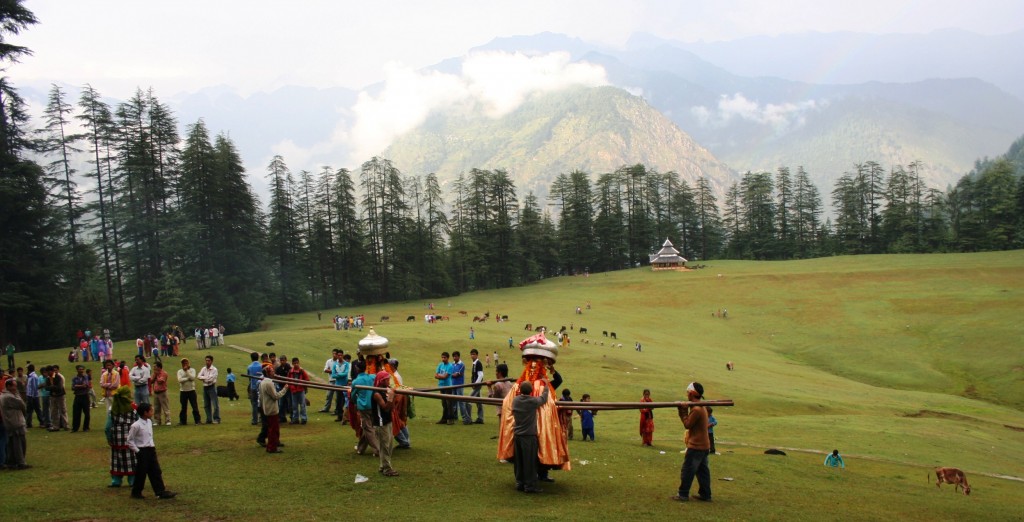 The local fellow, from whom the goat was bought, was a great help in marinating and then slowly roasting the thing. It became tastier with each round of the accompanying local drink! The goat was soon polished off and the group sound asleep, resting to make a grand entry into the GHNP the next morning.

The next day, bright and sunny, the local forest guard pointed to a valley below Lapah village and then to the looming mountain on the other side. That he said was the beginning of the national park. The sheer size of that mountain and its steep gradient right from the valley bottom immediately triggered a certain uncertainty into our group. The ladies in the group suddenly remembered how very tired they were already. Julius Caesar quietly muttered about his latent heart problem and the other men just said “Forget it”! That left the bird watcher couple and me now, our desire to at least enter the GHNP undiminished by the last minute en-masse desertion. So, led by the forest guard we boldly strode downhill.

But getting to the valley bottom took longer than we had reckoned. Once there and across a rickety bridge, we were totally enveloped by a dense broadleaved forest.  As we slowly climbed up and out the pristine condition and beauty of the forest unfolded before our eyes. It was a dazzling sight. We were in the GHNP now. As we turned towards the hill again the gradient rose sharply and for a while had us clambering virtually on all fours. We reached a resting ledge and panting asked the guard whether the way up was like this? For about an hour and a half he said matter-o-factly. Our hearts sank. The bird watcher decided to go on further up to have a look and clambered up with the forest guard, leaving me and the brave lady to our devices. But probably knowing intuitively what lay ahead, he said they’ll be back soon.

The wait lasted about twenty minutes. Our friend still panting, I think from the downhill effort as well. The guard was silently pleased at having to go no further. Reluctantly we turned back, sad but also happy to have been in the GHNP, wondering when we would be back, next. Once on the other side, we eagerly walked back to a hot lunch and the rest of our cheering group waiting for us at Lapah.

Nodnat – is a pen name that the writer with deep knowledge of Himalayan flora and fauna and a keen environmentalist has adopted. He hails from Kotgarh, in Shimla Hills and retired as Principal Chief Conservator of Forests from Himachal Pradesh forest department.