Shimla: Tata DOCOMO, the GSM brand from Tata Teleservices stable today launched its mobile services in the crowded market of Himachal, which other than already having a high tele-density has 9 other players providing mobile telephone services in the state. 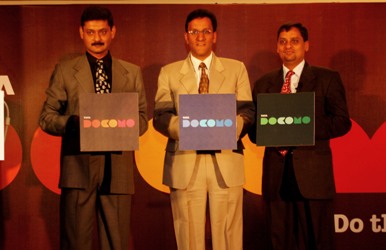 Speaking at the launch Aditya Gupta, chief operating officer for Himachal said that since the GSM service under the Tata brand was launched in June, 2009, this was the 17th telecom circle where the service had become operational.

For any telecom player, this is one of the fastest rollout of a pan India network. In Himachal, at launch we are able to provide seamless connectivity in 286 townships and 4342 villages, he said.

Spectrum to Tata Docomo was allotted in 18 circles and Rajasthan where we have spectrum, the service would be launched soon, he added.

Gupta said that the pay-for-what-you-useâ€™ model that enabled them to introduce the pay per second plan not only redefined the tariff models in the country but others players had following suit.

â€œThe plan goes with our policy of simplifying tariff plans for the customer and actually charging for just what a subscriber uses,â€™ he said.

The new service presently would only be available in the pre-paid segment and the post-paid connections would be introduced later said the COO.

With launch of Tata Docomo, we are also launching Indiaâ€™s first mobile community in Himachal Pradeshâ€”Buddynetâ€”wherein members enjoy calling rates of 1 paisa for 4 seconds for local calls, and 1 paisa for 2 seconds for STD calls within the community.

Since the launch of Tata DOCOMO services, he said, Tata Teleservices Limited had led in monthly subscriber additions for six consecutive monthsâ€”starting from August 2009.

â€œWe are focusing strongly on network superiority, coverage and service offerings. Our network footprint is the largest among all telecom operators in Himachal Pradesh, at the time of launch. We have made large investments in HP, and further expansion is on the anvil this year itself,â€ Mr Aditya Gupta said. â€œWe will unveil a portfolio of Value-Added Services that will reinvent mobile telephony in India, with products and services like diet-sms, Free Voicemail, Timed SMS Service, Free Missed Call Alerts, Call-me Tunes, etcâ€”all of them customized to liberate and refresh our subscribers,â€ he added.

With the entry of Tata Docomo in Himachal, there are now 10 players in the field which include Tata Indicom and Reliance Infocomm in the CDMA technology space, BSNL, Airtel, Reliance Telecom, Aircel, Vodafone, Idea and S Tel in the GSM space.