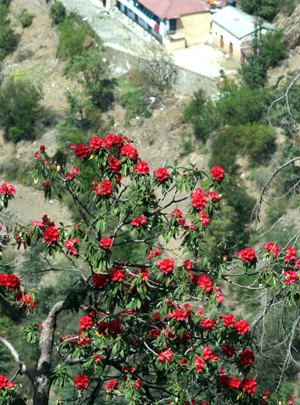 Shimla: Detractors of climate change notwithstanding, unusually warm weather in March has farmers, orchard owners and foresters worried as trees have blossomed a month early, jeopardizing livelihood patterns that are dependent upon a normal nature cycle.

Pink Rhododendrons, the state flower, which grows abundantly in the wild and normally flowers in late April is already in bloom in many places.

Alarmed by the early flowering, Sanjay Bhalaik – an orchardist in Kumarsain says, â€œrising day temperatures have caused an early blossom in cherry, apricots and plum trees. Now itâ€™s the turn of apple trees.â€

He added that while winter moisture has been able to support a fruit set in other trees but unless it rained prospects of a good apple crop are a matter of concern as the temperatures continue to rise.

PS Chauhan, head of Mashobra fruit research station that orchard owners rely upon crop management guidance said, â€œThough the day temperatures have crossed 25 degree Celsius but the situation is not so alarming as is being made out.â€

â€œApple trees are blossoming a little early and if there is some rain, crop prospects are going to be good,â€ he said.

Forestersâ€™ have noticed more unusual changes due to warming up of the March weather. â€œRhododendrons in the wild have blossomed up a month earlier than their normal time,â€ says Vinay Tandon, principal chief conservator of forests. â€œThe silk cotton tree too did bloom a month earlier than schedule,â€ he added.

Meanwhile the meteorological office in Shimla has recorded warmest temperatures in six years for the month of March. A high of 25.8 degree Celsius recorded on 23rd March, was the highest for the month since 2004, said Manmohan Singh, director meteorology.

He said that even the minimum temperatures across the state were 3 to 8 degrees above normal while the highs were 5 to 10 degree Celsius above normal.