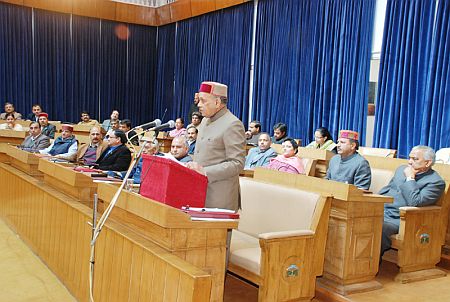 Shimla: Absorbing the setback of the below expectations transfers recommended by the 12 Finance Commission, the Himachal Pradesh government budget today sought to tighten belts and proposed overall increase of 4 percent value added tax (VAT) slab to 5% that would raise prices of many items barring edible oil and food grains, which stand exempted.

Other than VAT, chief minister Prem Kumar Dhumal who is also the finance minister mentioned in his budget speech that the government intended to impose goods entry tax for which a bill would be introduced in the house.

Presenting an Rs 197.51 crore surplus budget, Dhumal in his third budget of the term provided for an outlay of Rs 15,078 crore that incorporates borrowing amounting to Rs 2272.80 crores.

Later speaking to the media he said that by way of increased VAT the government expected to realize an additional revenue of Rs 20 to 25 crore.

He added that the proposed goods entry tax would be imposed on items like steel, diesel or other commodities which companies who were operating in the state but were making their bulk purchases outside, thereby depriving us of any revenues.

Responding to a query, the chief minister categorically ruled out any proposal for giving an unemployment allowance.

To contain impact of rising prices, state subsidy scheme on pulses, edible oil and salt would continue, he said, adding the foodgrains and edible oils have been kept outside the proposed increase of VAT taxes.

600 MW of additional generation capacity to be added

Other than these tax measures, the government expects the states hydropower generation capacity to increase by about 600 MW as some medium sized projects like Allian Duhangan, Malana II and Budhil in the private sector and Chamera III in the government sector are expected to be commissioned within the financial year.

The budget has laid emphasis on social and agriculture sector as uncertainty over extension of excise exemption beyond March for industry remains.

A Rs 372 crore crop diversification plan to be funded by Japan International Cooperation Agency and a Rs 85 crore apple rejuvenation projects are proposed to be implemented.

As a cost cutting measure, the budget proposed to involve the private sector in meeting government needs for office space. A policy whereby building constructed in the private sector could be hired on long term leases basis for housing government officers would be framed, said Dhumal. It would reduce the need to construct as well as maintain such buildings, he added.

For meeting drinking water needs and providing sewerages to the towns of Sujanpur and Sarkhaghat an outlay of Rs 260 crore stands provisioned.

To remove gender biases against the female child, â€˜Beti Hai Anmolâ€™ yogna for BPL families would be started. Under the yogna, for upto two girls born in a BPL family, the government would make a fixed deposit of Rs 5100/- each at time of birth which would only become cashable on adulthood.

Class 8 Board Exam to be done away with

As an educational reform the government announced doing away with a board examination for class 8 from 2001. Giving priority to education, the budget allocation for the sector stands at Rs 2567 crore, which includes Rs 2302 crores for salaries and other non-plan expenditure.

Taking cue from Incredible India brand, tourism in the state is to be brought under â€˜Unforgetable Himachalâ€™ brand and â€˜Har Ghar Kuch Kheta Haiâ€™ (Every house has a story to tell) compilation for Shimla city has been extended to include Har Gaon Ki Khani that would be documented as part of tourism literature. For promoting cuisine and handicrafts, there is a proposal to establish a Himachal Hat.