Shimla: Bimla Kashyap, a BJP national council member, is all set to replace Anand Sharma as the Rajya Sabha member from Himachal in the upper house for she was the lone candidate to file nominations for the seat at close of nominations today. 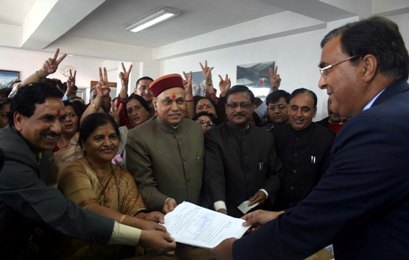 Congress which has 23 MLAâ€™s in a house of 68, failed to even muster a candidate for a no contest election and decided not to field any candidate. BJP has 43 members in the house.

Union commerce minister Anand Sharma, who completes his Rajya Sabha term on 2nd April, is one of the three MPâ€™s in the upper house from Himachal. The other two are Viplove Thakur of congress and Shanta Kumar of BJP.

Born in 1942, Bimla Kashyap has served as HP Mahila Morcha president for three times till 2006. Her husband late Sharwan Kashyap was a Jansangh leader.