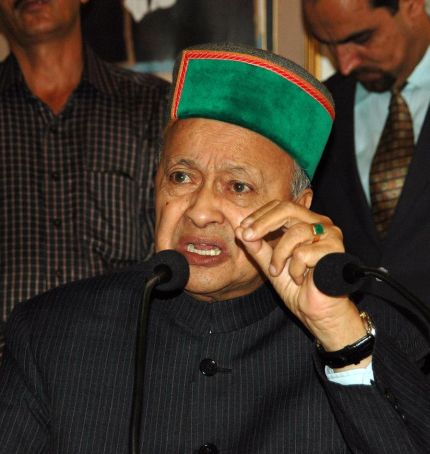 Shimla: Union steel minister Virbhadra Singh today demanded registration of an FIR against chief minister Prem Kumar Dhumal and suspension of DGP vigilance Daljit Manhas for unlawfully tapping telephone lines of political opponents.
Lashing out at the Dhumal government, the steel minister told the media, â€œgovernments as powerful as that of President Nixon in US have fallen over phone tapping in the â€˜Watergateâ€™ case and one Mahrashtara government also was a victim over the same issue.â€

â€˜The government by ordering a CID probe into such a serious matter has made a farce of the issue. What creditability does a state agency have to probe where the chief minister is involved,â€ questioned Virbhadra.

He said, â€œthe audio CDs that have surfaced were clearly an insider job of BJP men who differed with the working of the chief minister and one can clearly hear the conversation about chief minister instructing DGP vigilance to tape my and my wife Pratibha Singhâ€™s phones.â€

â€œWe along with other congress leaders have for long been saying that our phones were under surveillance and were being taped,â€ said the union minister. After release of these CDs the state government stands thoroughly exposed, he added.

Demanding a CBI probe, Vibhadra said, â€œonly then would the truth come out.â€ He added, â€œjust as in my case, let an FIR be registered against the chief minister and the DGP vigilance should be put under suspension till an investigation by CBI is done.â€

He said the state government was falsely claiming to be discriminated against but the truth remains that if funds as a special category state are not devolved to Himachal from the centre, the state would not even be able to pay its salary bills.â€

Ridiculing the BJP government creditability, he said that in its earlier term sops like regularisation of encroached lands were made on which the people were asked to submit sworn affidavits and now those very people were hounded by law agencies over the illegal act.

The earlier Dhumal government had proposed to carve out many new districts, which proved nothing more than a political gimmick that befooled the people then, said Virbhadra.

The minister left enough hints that he was not hanging up his boots from state politics, saying, â€œIâ€™m still game and still have an innings to play as I have not been bowled out yet.â€

On the upcoming internal elections of congress party, he said that he stood for a free and fair election and whoever emerged as the leader would be accepted by all for the party was a united entity.