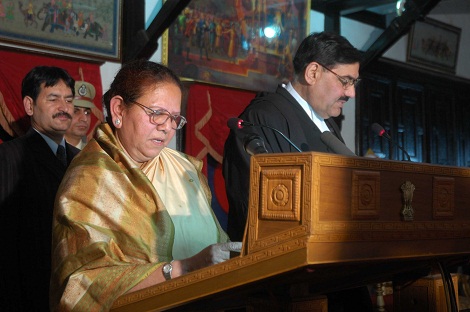 Shimla: On the 40th statehood day, Urmila Singh was sworn in as the 23rd Governor of Himachal at a impressive ceremony held at the Raj Bhawan, here today.

Speaking to media persons after the ceremony, the new governor said that though she had been to Himachal earlier but this happened to be her first visit to Shimla.

The governors position fell vacant after Prabha Rau, who had served as governor for less than two years here, was shifted as governor of Rajasthan.

Urmila Singh, who hails from Madya Pradesh, was born into a family of freedom fighters of Gondwana in Raipur district of Chhattisgarh.

Prior to being appointed governor, she was the chairperson of the National Commission for Scheduled Tribes from June 2007 to Jan 2010. Singh from 1998-2003 was the minister in the Madhya Pradesh government and has remained a legislator of the state assembly from 1985 to 2003.

It was on 25th January, 1971, that the Himachal Pradesh was pronounced as the full state of the Indian union.