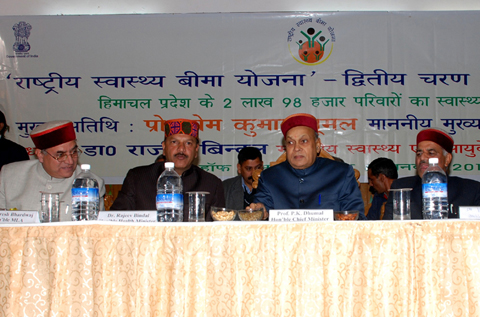 Shimla: Taking a step forward to alleviate the pain of poverty from the lives of Below Poverty Line (BPL) families Himachal Pradesh Government launched the second phase of the Rasthtriya Swasthya Bima Yojna in the State.

Prof. Prem Kumar Dhumal revealed that Himachal Govt. and The New India Insurance Company Ltd. signed MOU to execute the scheme across the state from this year March 1st for a year.

The scheme will provide insurance of Rs. 30,000 to the BPL families for treatment.

About 2.98 lakh BPL families will be benefitted under this scheme in all 12 districts.

Prof. Dhumal said that the State Government had envisioned a Scheme for critically ill members of the BPL families extending a health insurance cover of Rs. 1.75 lakhs per annum per family for meeting expenses of hospitalization and surgical procedures in the case of Cardiac and Cardiothoracic Surgeries, Genito Urinary Surgery, Neurosurgery, Radiation Oncology, Trauma, Transplant Surgeries, Spinal Surgeries and Surgical Gastro Enterology etc.. He said that the State Government would be fully funding the Scheme out of its own resources and Rs. 10.81 crore were likely to be spent during current financial year. He said that the package would include provision for transport allowance of Rs. 1,000 per visit subject to annual ceiling of Rs. 3,000 per person.

Dhumal said that the State had been awarded by the Government of India for successful launching of the First Phase of the Rashtriya Swasthya Bima Yojna on pilot basis in the districts of Shimla and Kangra for preparation of Smart Cards within the allotted time frame. He said that the State Government would be providing a cash award of Rs. 50,000 to the one Gram Panchayat in each district for preparation of cent percent Smart Cards, Second prize of Rs. 25,000 and Third Prize of Rs. 10,000 would also be provided as motivation incentive to the gram panchayats out of its own resources with a view to motivate panchayati raj institutions to come forward in taking up the initiative.