Shimla: It was a touch and go for the two congress factions as Madhu Sood from the Kaul Singh camp prevailed upon Seema Chauhan of the rival Virbhadra camp by one vote for the Mayorâ€™s election today with the BJP ending up last in the triangular contest. For the deputy mayorâ€™s election, Harish Janartha turned the tables upon challenger Sudhir Azad by decisively winning it. 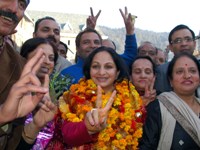 Intense lobbying and defiant posturing did help Chauhan to garner 9 votes, while Madhu Sood, who was made the official congress candidate by party president Kaul Singh at a party meet on Friday, secured 10 votes to be elected mayor for the remaining two and a half year term. BJP candidate Manju Sood was able to fetch only 6 votes even though the party has 8 councillors in the municipal house.

In a house of 25, congress has 15 councillors, BJP has 8 and the two who are affiliated to CPI(M) had declared their support for congress in the election. 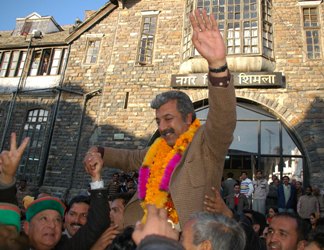 Though congress had a majority in the house, the keenly watched election was trial to test the writ of party president Kaul Singh, especially after he has fallen out with former chief minister Virbhadra Singh. Senior party leader Vidya Stokes, who is also the leader of the opposition, cast her lot with Kaul Singh, but were unable to ensure a win for their candidate for the deputy mayors position.

What has come as a rude shock was that BJP was unable to contain its flock. Fishing in troubled waters and sensing the open dissidence among congress councillors, BJP had put up Manju Sood as a candidate for the mayorâ€™s post, despite the heavy shortfall in numbers required. Off the 8 councillors affiliated to the party, the official candidate only secured 6, causing an embarrassment to both the candidate and the party.

With the official congress candidate losing the deputy mayorâ€™s election, Kaul Singh said, â€œthe matter of indiscipline among the councillors would be put before disciplinary committee for necessary action.â€