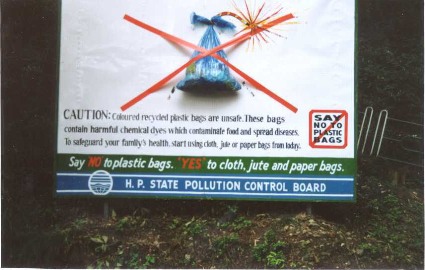 Shimla: Culmination of a week long â€˜polythene hatao â€“ paryavarn bachaoâ€™ campaign to clear the hills of plastic waste has resulted in collection of 138.1 Tons (1381 quintals) of the waste, resulting in cleaner environs before winter rains and snows set in.

After a review meeting of the campaign today, chief minister Prem Kumar Dhumal thanked the people for their active participation saying it was the overwhelming support of the people that had made a success of the campaign.

The plastic cleanup campaign launched on December 21 from Dharamshala and concluded on 26th December was spread over 11 of the 12 districts in the state.

Among the competing districts, 42.5 tons of waste plastic was collected in Shimla district, followed by Solan with 25 tons, 19 tons in Kangra district, 12 tons in Chamba, 11.4 tons in Kullu, 10.8 tons in Una, 10 tons in Sirmaur and 3 tons each in Bilaspur and Mandi districts, said an official spokesman.

Hamirpur, the home district of the chief minister collected 1.2 tons and as Kinnaur and Lahaul-Spiti the two high altitude districts are in the grip of severe cold conditions the campaign managed to collected 200 kilograms of plastic waste in Kinnaur district. Nothing could be collected in Lahaul-Spiti district, said the spokesman.

The collected plastic would be handed over to the Public Works Department for shredding so that it can be used for mettling of roads in different parts of the state, said Dhumal.

An experiment of using shredded plastic in road mettling had proved to be a success and this was being replicated in other parts so as to make the road surfacing stronger and lasting.

The chief minister asked the people to maintain the tempo and make collection of waste plastic a habit. â€It would help in maintenance of good environmental conditions and help to save Himalayas from the plastic waste, keeping the hills cleaner and greener for the coming generations,â€ said the chief minister.