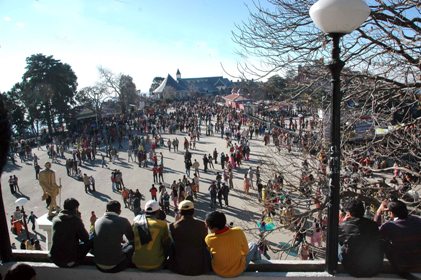 Shimla: Managing uncontrolled crowds on New Yearâ€™s Eve has led the security officials to do away with organized programs for the upcoming bash in the heart of the city on The Ridge, even as hotels report a full house and have arranged an array of programs to usher in the New Year for their guests.

Though a cold wave overhangs the hills station, but weather station in charge Manmohan Singh rules out any chances of snow around the turn of the year. â€œThe forecast for the next three days does not indicate any snowfall,â€ he said.

The high and low temperatures for the day were 12.6 and 4 degree Celsius. Chilly winds did have most visitors out in heavy woolens. â€œIn the last two decades it snowed only in 1990, 1995 and 2002 for New Yearâ€™s eve,â€™ said Singh

Tourism officer Surinder Justa said â€œhotels are fully booked from 30th December to 1st January and one would be lucky to find accommodation close to the city.â€

Cultural programs to entertain tourists, which included local dances and musical evenings, were being organized on The Ridge for nearly 10 years now. Normally there are over 50000 visitors out celebrating arrival of the new year in Shimla each year,” he said.

In and around Shimla there are about 300 hotels which have a bed capacity of about 9000 beds. Besides that there are thousands of house owners who only visit the city during summer or around this time of the year, said the tourist officer.

However hotel owners say that compared to last year tourist traffic for the festive week has been impacted. â€œDespite a long Christmas weekend there were fewer tourists this year,â€ says hotel owner Vinyak Jisthu. For new years we are fully booked, he added.

Police chief, RM Sharma said â€œfor security reasons cultural programs have been done away with for 31st December evening as it not only becomes difficult to control crowds but if there is any emergency it would be hard to manage.â€

Disappointed on learning that the cultural events were taken off the planned festivities agenda for the all important evening, Meena Thakur, a university student resident said, â€œIts only around this time that there is some night life in the city before it braces to face the winter evenings ahead. Cutting out the cultural activities would certainly disappoint many, she added.

Talking about the security arrangements Sharma said that extra police had been deployed around the city and 5 Naka points had been opened where checking of vehicles would be done. â€œAnybody carrying a unlicensed weapon, it would be seized and so would unauthorized liquor bottles,â€ he said.

Considering parking shortages, the administration would permit parking of vehicles wherever space was available on New Yearâ€™s Eve, said the police chief adding that no tickets would be booked on that evening unless undue hindrance is caused to traffic flow. Special parking lots have been opened up for accommodating the increased number of outstation vehicles for the week, he added.