Shimla: Ruling party BJP today expressed satisfaction with two years functioning of the Prem Kumar Dhumal government here and held inherent weakness within the party responsible for losing the Jwali by-election to the opposition recently but maintained that congress was losing ground. 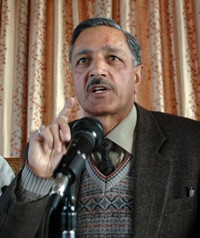 Speaking to the media BJP spokesman Ashok Kapahtia said opposition congress for the last two years has been left without an issue and was only opposing for the sake of opposition.

With congress harping upon that BJP was taking credit for works done by their government for two years now has reduced the issue to a farce and a joke, he said. â€œIf congress would have done half of what it not is now claiming, then why did they lose the election, questioned the spokesman.

The party is examining the inherent weakness that cost the party the Jwali by-election and action would be taken against those who worked against the partyâ€™s interest, he said.

The party was also trying its best to identify two councilors in Shimla municipality who had defied the official line and voted for a congresswoman as the new mayor of the city, he added.

He said that maintaining a delicate balance between limited resources and the needs of the people, in two years the government had been able to deliver qualitative governance that is distinct in terms of programs and implementation.

Even when recessionary trends emerged, the pace of development did not slow down; he said adding that the farm sector got priority in the development programs of the government.

To boost farm and diary productivity, programs like installing of poly houses, Doodh Ganga project, minor irrigation and watershed development programs have been launched, said the BJP spokesman. Emphases on environmental issues have the direct impetus from the chief minister, he added.

Whereas the BJP government has increased daily wages, granted 50 percent reservation for women in local body elections initiated a process for recruiting 28,500 job seekers, the UPA government had not only curtailed the Industrial package but had failed to contain rising prices that have run up to over 19% was deliberately slowing down construction of the Bilaspur rail line and had reduced the states food quantity, he said.