Shimla: Keeping pace with demanding times, it has been a bag of mixed achievements for Himachal Pradesh University that not only handed out 415 degrees and gold medals at its annual convocation, but other than qualifying for enhanced grants from University Grants Commission aspires for a better NAAC accreditation and in the sports arena, Jagdish Kumar, a lecturer in physical education brought laurels by winning the bronze medal at World Masters Wrestling Championship held in Ankara, Turkey. 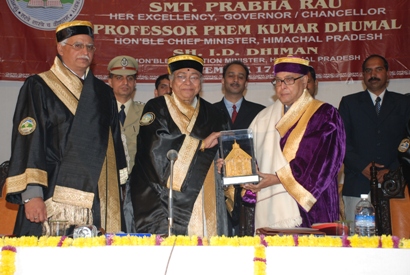 Finance Minister Pranab Mukherjee, took time out from his busy schedule in November to specially attend the annual convocation. Incidentally SK Gupta, the vice-chancellor was a recipient of his doctorate degree last time Mukherjee had attended an HPU convocation in 1980.

Defeating Mustaffa of Iran at the world grapplerâ€™s championship in August, Jagdish Kumar did the country proud by winning a medal at the international level.

To augment the institutions achievements, University Grants Commission sanctioned Rs 7.75 Cr under for purchase of equipments and books, holding seminars and for providing pre-examination coaching to scheduled caste and tribe students.

Besides allocation of special funds for physics and mathematics faculties, UGC enhanced budget allocation under 11th Plan to 14.45 crore which is more that Rs 10.40 crore over the previous one. 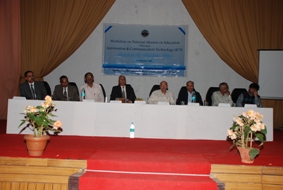 Vice-chancellor SK Gupta other than being conferred the â€œHimachal Rattanâ€ by All India Conference of Intellectuals at Punjab University did attend an collaborative project on â€˜Multimedia and GISâ€™ in Sweden.

Executive council at its meet in August approved new pay scales for the university employees.