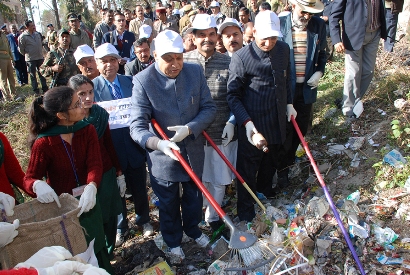 Shimla: Chief minister Prem Kumar Dhumal by participating in the polythene cleanup operation in Dharamshala today, launched a week long drive that would cover the entire state to rid the hills of plastic waste litter and recycle it into either road building or cement making.

Making an appeal that the launch of â€˜Polythene Hataoâ€“Paryavaran Bachao Abhiyanâ€™ the chief minister said campaign needed to be made into a mass movement for making the state polythene free.

He said the Shimla Declaration on Himalayan States Chief Ministerâ€™s Conference had become the basic document of the country for launching of environment protection campaigns.

A community led program had also been launched in the state and 400 dumping sites had been identified for dumping of muck and other solid waste properly, said Dhumal.

Asking people not to throw or litter plastics around but to collect them at one place where it would be collected, which would then be shred and mixed with tar for road surfacing. The state has banned use of polythene bags from October 2, 2009.

On the occasion, the chief minister announced opening of one Pollution Control Board Regional Office at Dharamshala for the benefit of the people of the area.

The chief minister also flagged off vehicles carrying shredded polythene, which would visit different places to collect and shred the polythene.

Kishan Kapoor, Industries Minister, thanked CM for launching the campaign from Dharamshala. He said that with the industrialisation the environmental hazards started surfacing and adversely affecting the environment.

Sarojini Ganju Thakur, ACS, Science, Technology and Environment said that the campaign was simultaneously being launched all over the State from today onwards.

School children presented an impressive cultural programme awakening the society towards the degradation of environment due to use of plastic.