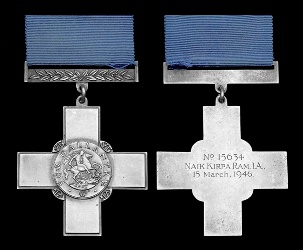 Shimla: With Himachal police having detained Kirpal Singh from Moga in Punjab to investigate his claim that Brahmi Devi, widow of Naik Kirpal Ram, had gifted him a George Cross medal for services rendered as mentioned in an affidavit produced by him, Dix Noonam Webb, the London auction, has put out that prior to any sale taking place strenuous investigations about rightful ownership would be made.

ID Bhandari, Additional Director General of Police CID said, â€œKirpal Singh would be interrogated to find out how he knows Brahmi Devi and what services he had rendered that obliged her to gift him the gallantry award medal that he has stated in an affidavit.

Bhandari adds, â€œauthenticity of the document produced is questionable as the affidavit is not attested by any magistrate, which is mandatory for any legal document of such kind and the date at the place where the stamp paper was purchased only shows No 534 dated 28.4.MM, with no year mentioned.â€

Meanwhile, Nimrod Dix, Managing Director of Dix Noonan Webb, the London based auction house taking note of reports that the George Cross medal in question being a stolen on has on their website stated that, â€œWe take very seriously any claims in respect of stolen property and as is usual in cases like this we are making strenuous investigations to clarify rightful ownership of the property prior to any sale taking place.â€

Dix goes onto explain, â€œAs stated from the outset in our catalogue description included with the medals is a sworn affidavit by the widow of Naik Kirpa Ram, Smt Brami Devi, relinquishing ownership of the George Cross and other medals to another party. It can be seen that this affidavit, which bears her fingerprints, is dated April 2000, some two years before the report of the theft.

The affidavits attached with the medal catalogue are for the year 2000, whereas Brahmi Devi reported theft of the medal in 2002 that has now ended up for auction sale in London with an estimated going price of 20000 to 25000 pounds.

Bhandari says that the investigation would be able to gather evidence soon as some of the witnesses to the affidavit also have been detained. We will approach both Scotland Yard and the auction house with the evidence gathered and should be in a position to stall the auction of the medal and hope to get it back to the rightful owner, he said.

The contentious medal was awarded to Naik Kirpa Ram posthumously for having picked up a live grenade which exploded on him on 12th November, 1945, leaving him fatally injured but managed to save the rest of the section that he was commanding.

Widowed at 13, Brahmi had received the medal from Field Marshal Lord Wavell, Viceroy of India on 15th March, 1946. She never remarried and lives in village Bharpal in Bilaspur district where she is looked after by a niece.