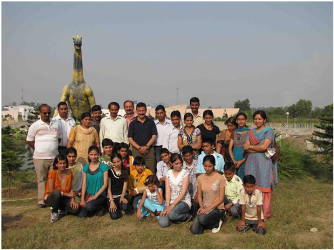 Shimla: To reward budding young scientists from schools of Himachal who were winners at the Children Science Congress- 2008, HP State Council for Science, Technology and Environment organized a visit for students to Pushpa Gujral Science City, Kapurthala, Punjab.

The tourâ€™s major objective was to provide a forum for the children of the state to pursue their natural curiosity and to quench their thirst for creativity, to effect a change in the way science is taught at schools by relating the learning process to the physical and social environment around, to stimulate by relating scientific temperament and learning scientific methodology for observation, collection of data, experimental analysis and then arriving at a conclusion.

The 16 young scientists who visited the science city on 14th October were accompanied by 8 supervisors and one state coordinator from the state council.

Rajesh Solanki, the coordinator said that the students gained immense experience and enjoyed the show in Dome Theatre.

Virtual expeditions were full of adventure & excitement. The students also faced and experienced earthquake at various Richter scales. Students were also put to test through simple but full of fun experiments related to Physics, Chemistry, Biology and Matehmatics.

The 6 to 12th class students also had the opportunity to visit Kidâ€™s park, Energy Park, Dinosaurs park and also provided an opportunity to interact with the students of Punjab, said Solanki.