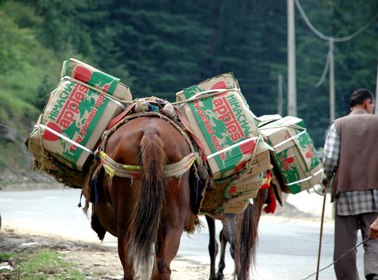 Shimla: A deficient farm marketing infrastructure notwithstanding, higher sale realisations has helped to corner a substantial share of the apple wholesale market, with marketing yards in Shimla district itself registering a business turnover of over Rs 100 crores.

â€œIt has been an unusually good year as far turnover from sale of apple boxes is concerned for us here,â€ says Gian Chandel, chairman Shimla-Kinnaru Agricultural produce marketing committee (APMC).

The Dhalli marketing yard at Shimla has sold over 10 lakh boxes of apples, he said. Last year the market had recorded a sale of about 14 lakh boxes.

Harvest in higher valleys of Kinnaur is still going on but so far we have collected about Rs 50 lakh as 1 % market fee from the business transactions recorded at Dhalli and other markets, says BL Sharma, secretary APMC.

With much of the fee still to be collected, the turnover from the fruit markets has crossed Rs 100 crores, he said.

Elsewhere in Shimla district alone, over 3 lakh boxes were sold in Rohru and over 2.5 lakh apple boxes in Narkanda market, disclosed an APMC official.

Given the high value of the fruit this year, there were many risk factors in handling such large transactions, says Tara Chand, manager with a fruit merchant. 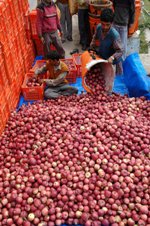 The highest price touched Rs 2700, whereas at the lower level it hovered around Rs 400 to 500 for one box of the royal variety of fruit, he disclosed.

Lower productivity helped to push up the prices, much to the benefit of the growers community, said an official of the horticulture department.

Against a production of about 2.60 crore boxes in 2008-09, just over 1 crore boxes have been marketed this season.

Other than Shimla, successful marketing yards are operating in producing area of Rohru, Narkanda, at Solan, Kullu and the auction yard at Parwanoo was revived, this year, after a long time.