Shimla: At a time when morale among BJP cadres across the country is low, the three day visit of Mohan Bhagwat, the RSS chief, to Shimla from November 7 has assumed significance. 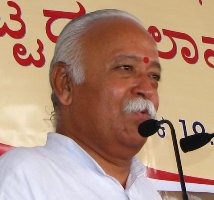 Bhagwat, RSS chief pracharak, is expected to address cadres at Hotel Peterhof on November 8, where the organisation head was also expected to express his views on the prevailing political scenario as well as internal and external security concerns, sources disclosed.

The historic Peterhof building, where the Nathu Ram Godseâ€™s trial was held after the assassination of Mahatma Gandhi, happened to the same venue where the BJP held its Chintan Baithak a couple of months ago and debated the reasons for the partyâ€™s debacle in the May general elections.

However, it was the expulsion of Jaswant Singh, senior leader and founding member of BJP that overshadowed the deliberations causing a rippling affect among party workers across the country.