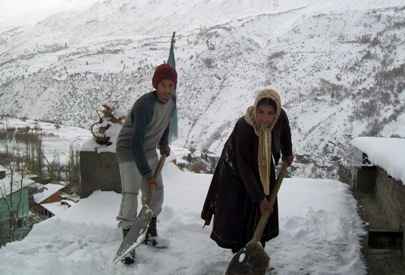 Shimla: With higher reaches experiencing snow and widespread rains in lower hills bringing down temperatures, a cold wave sweeping through the hills slowed the pace of life, forcing people to pull out heavy woolens and start up heating systems to live out the early winter days.

Light gale winds lashed Shimla in the afternoon, which were accompanied by rain and sleet, yet many young people out for a weekend holiday thronged The Mall Road braving the cold and the rain. The tourist city recorded a high temperature of 16 degree Celsius which dropped to 3 degrees Celsius at the low point.

Elsewhere, Keylong the district headquarter of Lahaul recorded 16 centimeters of snow and the mercury hit a minus 6 degree Celsius, marking it as one of the coldest place in the state. Koksar recorded 30 centimeters of snow, the met office reported.

Snow was also reported from Pangi, Bharmour and other higher reaches of Chamba district. Cold conditions with cloudy skies were recorded in Kinnaur though no report of snow was received. Kalpa, the district headquarter of Kinnaur recorded a high temperature of 8 degree celius and a low of minus 2.4 degree Celsius, the weather man reported.

Lower parts of Kullu valley received rain whereas the 13,050 feet high Rohtang pass was experiencing heavy snow. Traffic across the pass into Lahaul valley was closed a week ago because of heavy snow. Bhunter weather station in Kullu valley recorded a low temperature of 6.7 degrees Celsius.