Shimla: Setting out a task of connecting the youth with the governing process, congress icon Rahul Gandhi said that be it congress, BJP or any other political party, not enough space was being given to young people as it should be. 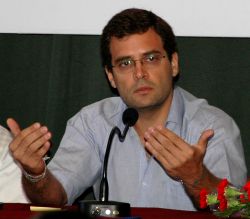 On a visit here, congress general secretary, Rahul Gandhi was interacting with the media. â€œThe youth is eager about to know what we are doing to secure their future and my effort is to connect them with nation building,â€ he said.

Slamming the BJPs â€˜India Shiningâ€™ election campaign of 2004, the congress general secretary said, â€œit was out rightly rejected by the people. India was only shining in urban areas and that too only for the elite.â€

Rubbishing BJPâ€™s ideology, Gandhi said â€œat a time when one is looking at a future, they harp upon a 1,000 yearsâ€™ old ideology. Pakistanâ€™s founder Mohammed Ali Jinnah is history now. At a time when one needs to move forward they are talking about Jinnah again.â€

About Pakistan, he said, â€œPakistanâ€™s internal problems do affect us but undue importance is given to the country. When compared to India it is a much smaller nation.â€

The worldâ€™s attitude towards Pakistan has changes and there are certain issued related to the country that need to be managed, said Gandhi. We have created pressure on the country and so is the world asking Pakistan to curb terrorism, he added. 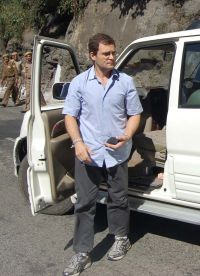 Speaking about his visiting villages, he said, â€œit was an effort to gather first hand information about the condition of rural India and how the countryâ€™s progress had touched them.â€

â€œCongress believes in the ideology of upliftment of the poor and downtrodden,â€ he said.

Out on a day long visit to interact with National Students Union of India (NSUI) cadres, he said that it was of uttermost import to bring more democracy to both NSUI and Youth Congress, which are frontal organizations of the party.

My efforts are to have elected people head these organizations and the culture ofÂ  nominating leaders should be done away with. It would take some time but we are already in the process and have got elected bodies heading these organizations in four states, he said.

Before heading out for Dharamshala, Rahul later in the day interacted with students at the Himachal Pradesh University, where media was strictly kept of the bounds.