Shimla:The country was facing a grave external and internal security threat, said Shanta Kumar, BJP national vice-president, and urged Prime Minister Manmohan Singh to call for an all party meet to overcome the challenging environment by evolving a consensus over initiating revolutionary policies. 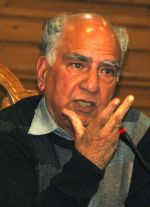 Speaking at a media conference call, Kumar said that the unstable condition in Pakistan, Chinaâ€™s meddling in Indiaâ€™s internal affairs and Bangladesh giving shelter to anti-India elements, coupled with the threat posed by Naxalities and Maoists were too serious issues to be handled by any single party.

There needs to be a national consensus over fighting utter poverty that was feeding Maoists cadres spread out in over 130 districts across 20 states, he said.

Economic disparity where the rich were allowed to get richer and the poor were feeling deprived that has brought about a great divide and unless this is not tackled properly, the country faces a grave danger to its internal security, said Kumar.

While appreciating Rahul Gandhiâ€™s efforts to connect up with rural India as well as the down-trodden, the senior BJP leader held that in the first place it was congress policies, with dynastic lineages going back to Nehru, Indira Gandhi and Rajiv Gandhi that had failed to root out poverty in the country.

â€œI fear that Rahul Gandhiâ€™s efforts may turn out to another set of empty promises to befool the poor,â€ he added.

Commenting upon congress winning elections, he said, â€œcongress success is because of a weak opposition. Its not because of their empty Garibhi Hato sloganeering but because the opposition has failed to provide a credible alternative that they win elections.â€

BJP was introspecting over its losses and soon there would be perceptible changes in the party, he disclosed.

Outlining steps that could tackle utter poverty, Kumar said that an â€˜Anothodya Taxâ€™ on corporate could raise funds for the poorest of the poor, reservations in jobs can be increased to 50 percent for BPL families and if serious efforts are made, the estimated Rs 60 lakh crore black money stashed away in secret Swiss Banks accounts can be recovered.

In response to a question about the state government turning soft on tackling corruption after it revoked suspension of officers allegedly trapped with graft money, Kumar reacted, â€œsuch people should be removed and jailed, their properties need to be seized.â€