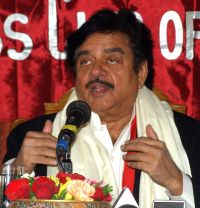 Shimla: Fresh from having suffered electoral defeats in Maharashtra and Haryana, after the debacle in the May Lok Sabha elections, cine star and BJP leader Shatrughan Sinha, said, â€œthe troubles ailing the main opposition party needed surgery as no ordinary treatment would restore it to health.â€

At a â€˜meet the pressâ€™ program, Sinha here said, â€œBJP faces elections in two other crucial states of Bihar and Jharkhand soon and unless the RSS intervenes quickly to resolve the leadership crisis facing the party, it would not fare any better in these states.â€

He said that it was not secret that BJP was an offshoot of the RSS, but like him, all in party had not come from the parent organization.

Echoing Arun Shourieâ€™s remedy for the partyâ€™s woes, Sinha said that RSS needed to take BJP under its wings and guide it out of the leadership crisis, lest the disarray and confusion further demoralize the rank and file.

â€œThe defeat in Maharashtra and Haryana and the earlier bigger loss in the parliamentary election was not an overnight development, he coyly admitted, â€œit is only a result of the leadership crisis facing the party.â€

He held that despite there being many burning issues like, mis-governance, steep price rise, farmers committing suicide, power shortages and others, the party leadership had failed to rake them up forcefully enough.

â€œWe had an opportunity to go for the kill but instead we caved in to become the prey, said Sinha.

He lamented that at a time when tough action was needed to revive the party, drawing room strategists who were out of tune with ground realities, were being rewarded instead of being held accountable.

â€œThere is no dearth of leaders in the party, he said as he counted Arun Shourie, Yashwant Sinha, BC Khanduri and Shanta Kumar who were capable of pulling the party together again.

Discounting Venkiahnaiduâ€™s call that LK Advani would be captain of BJP in 2014, Shotgun, as Shatrugan is popularly known as said that Sushma Swaraj could be a capable candidate for the top job, should Advani give up his post.

â€œI hold Advaniji in high esteem and am no one to speak on whether he should continue or not, but it will give me immense pleasure if Sushma Swaraj is chosen for the jobâ€, he commented.

He cited expulsion of Jaswant Singh from the party as a case that only added to the leadership crisis.

â€œIt is unfortunate that a leader of Jaswant Singhâ€™s stature was expelled without reading his book or understanding it and the action had only sent out a wrong message to the party rank and file. The fall out of the decision is there for all to seeâ€, he remarked.

Sinha counted Manmohan Singh as â€œthe best prime minister the country had since independenceâ€ considering his honesty and integrity, but â€œperformance wise it could not be said so.â€