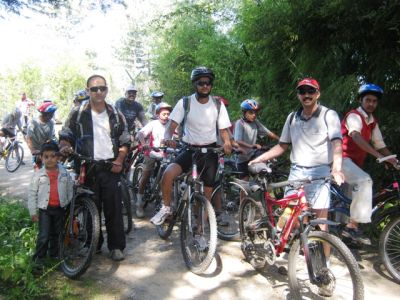 Shimla: The event that saw participants riding 18 km on a mix of roads and walking tracks around Mashobra and Kufri was organised by â€˜BSA Adventure Hillsâ€™ and supported by a local adventure club ‘Team Avalanche’ to inspire people to take to Mountain Cycling in Shimla.

34 participants joined the ride which started from Hotel Woodpark in Dhalli. Lunch and cycles for the ride were provided free of cost by â€˜BSA Adventure Hillsâ€™. The first part was an uphill track that led to near the â€˜Retreatâ€™, the summer residence of the President of India. The track then dipped down to Mashobra from where it followed the Mashobra â€“ Bekhalty road to near Dak Bangla. A torturous 2 km uphill then led the riders to Kufri where everyone stopped for tea and biscuits before the final descent to Hotel Woodpark via Chharabra.

The young children from Stokes Memorial Public School displayed exemplary spirit by completing the entire grueling route without assistance, even at places where the steepness of the terrain forced them to dismount and push their bikes uphill.

Asked midway if they wanted to stop cycling and sit in the car, they said in unison, “No, we are doing it.” 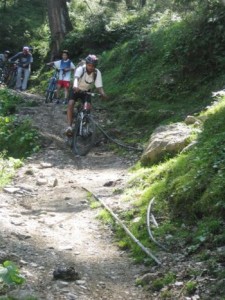 The youngest participant, four year old Udvansh who was riding pillion behind his father, also got into the spirit of things and helped push the bike up the entire 2 km uphill to Kufri. â€œI want my own cycle next time,â€ was his constant refrain.

Apart from the fun element some of them came for the thrill of a challenge. Like businessman Saurabh Goyal who had brought his entire team of staff members. â€œI had made my mind to cycle every inch of the way. Even if it meant stopping a hundred times on the ascents,â€ said Saurabh.

For some, cycling is about keeping good health and building stamina. According to Rakesh Verma, the lead cyclist in the event, “Cycling is good for health and fun too. I have stopped using my motorcycle since I discovered the joys of cycling and I want more such events to be organized so that everyone can experience it and get hooked.â€

Sachin Despande, who had come all the way from Delhi to join in the ride, was thrilled by the experience. â€œI have done

a fair amount of cycling but had never tried mountain biking on narrow singletrack paths. Iâ€™ll surely be back for moreâ€, said Sachin.

Sandhya Tyagi, the representative of â€˜BSA Adventure Hillsâ€™ informed that the company planned to hold more such events in the future to popularize cycling in the country. â€œThis was the second cycling promotion event that we have organized in Himachal, the first being a Manali â€“ Solang ride in end June. The whole idea is to promote carbon neutral tourism and to create an awareness about the advantages and joys of riding cycles. People have the wrong notion that cycling is not possible in the mountains due to the ascents and descents and we aim to dispel the notion,â€ she stated.

Get the right triathlon training to be fully ready during competition.