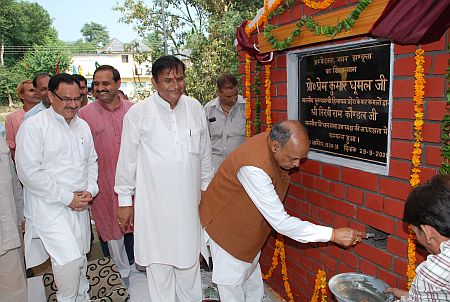 Shimla: With the government having failed to secure job avenues for the unemployed in the industrial sector, emphasis has shifted back to strengthening the farm sector as two ambitious agriculture and dairy programs worth Rs 653 crore stand launched in the state.

Speaking at a public meet in Jhanduta in Bilaspur district, chief minister Prem Kumar Dhumal stated that as over 90 percent of people reside in villages, added attention to accelerate the rural economy is being accorded.

He said, the NABARD funded Rs 300 crore ‘Doodh Ganga’ animal husbandry project would revolutionize the dairy farming sector in the state. After pilot projects in Solan, Sirmaur and Mandi took off, it would be extended to entire state, he added.

Farmers from Bilaspur had successfully demonstrated that controlled climate agriculture in poly house farms backed by suitable irrigation schemes that were being provided 80 percent subsidy by the government, had opened up remunerative self employed avenues, he said.

He said that efforts would also be made to provide AC buses, connecting the flower growing areas with main markets to generate better incomes.

Speaking on the occasion, JP Nadda forest minister said that rural scenario was fast changing towards self reliance.