Shimla: Having promised bounty land by offering to regularize encroachments, the governmentâ€™s U-turn by now threatening to evict encroachers on the very basis of affidavits asked for by the revenue authorities has trapped over 1.5 lakh people into confessing the illegality.

The issue is a spillover from the earlier term (1998-2003) of chief minister Prem Kumar Dhumal, when the government in a hurry announced an regularization 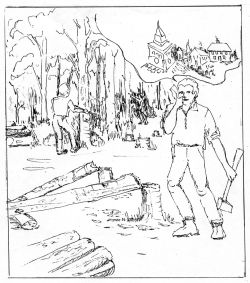 of encroachment policy, marking as late as December 2000 as the cutoff date.

Without revealing much, revenue secretary Rakesh Kaushal said, â€œthe matter is still in court and is still awaiting adjudication.â€

Chief Minister Prem Kumar Dhumal has already stated that the government would consider providing relief to weaker sections, consisting of scheduled caste or tribe, widows and other marginal people on encroachments made.

At the same time he had warned that the government would act tough on encroachers. â€œThose who have felled forests to raise orchards would be evicted,â€ he had said.

Before the matter went to court, by 2002, revenue authorities had received about 1.56 lakh applications on basis of about 9,500 hectares of land in the state was sought to be regularized.

Applicants were asked to submit affidavits, along with the encroached land bearings needing to be regularized.

â€œItâ€™s a breach of trust on the government part,â€ says Ashok Chauhan (name changed to protect identity), one of the applicants under the encroachment policy.

â€œFirst they took us in confidence about regularizing encroachments and now the very affidavits we submitted are being used to prosecute us,â€ he lamented.

At one point, early last year, the High Court had asked for registering FIRâ€™s against all encroachers but on pleading from the revenue authorities had deferred it.

Sources added before taking up registrations of cases and evictions, revenue officials are segregating the petty encroachers from large scale violators, whom the authorities intend to go after.

In response to an earlier policy to regularize encroachments, the courts in September 1997 had struck down the executive order terming it â€˜arbitrary, illegal and unconstitutionalâ€™ holding that public policy could not be a camouflage for abuse of power, which encouraged people to encroach public lands and also led to corruption among officials.