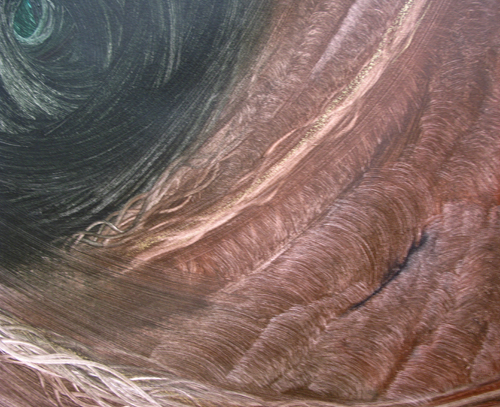 The primordial dark forest, both a mythic and geographic space, has been a part of our collective and personal subconscious since the beginnings. It is an object and symbol of complex and layered realities and in Indian mythology a locale and metaphor of retreat for the purpose of spiritual growth and awareness. Siddhartha Gautama sits under the peepul tree, waiting/working for enlightenment that transforms him into the Buddha. In the Mahabharata, the Pandavas retreat into the forest for 12 years and patiently wait to live out their dharma. The composer of the Ramayana, Valmiki, spends a 1,000 years meditating without moving. Ants cover him completely, turning him into the ant hill of his name (Valmika=son of ant hill). And in Valmiki’s Ramayana, Ram and his devoted wife and brother are forced into exile in the forest.

Dark Forest, like my previous Indian exhibits (Flux & Flow/Pravah, 2006 ; Energy Flows/Shakti Pravah, 2007), have focused on my preoccupation with the energy flow of the natural world that has deeply enveloped me for the last 40 years. Since 2,000 I have trekked over 1,400 km in the wondrous mountains and forests of Himachal Pradesh (primarily as an advisor to the Great Himalayan National Park). What always impresses me is the constant shifting focus: from the small details of leaves and ferns, stones and vines and water rippling, to the majestic tectonic thrust of the jagged peaks and the layered, disappearing Himalayan mountain ranges. The Dark Forest paintings are my personal interpretations of the alternating micro and macrocosms that envelope us all.

In this Age of Climate Change and global warming, our planet’s forests take on an even greater role than they have played in our past. They are the lungs of our Earth taking up the ever-increasing greenhouse gas, carbon dioxide, thus helping to slow down its warming effects. Through photosynthesis trees pump out oxygen so vital for our respiration. Our forests, from the coniferous and broad leaf of the temperate zones to the tropical equatorial regions, all embrace complex ecosystems with great biological diversity and genetic treasures: some of value to man but more importantly to the functioning interrelationships of the Great Web that embraces us all. For 25 years I was involved with NASA’s efforts to raise awareness about the impending issues of global change and warming. Each year more satellite data painted an increasingly disturbing picture: ozone depletion, sea surface temperature rise, sea ice melting at both poles, more deserts, and terrestrial temperatures rising. These images had their alarming power but it took a long time for the world at large to respond and in some quarters there is still resistance and disbelief.

In this series of paintings, I have been little concerned with the vegetal green aspect of the forest: the fluttering light and myriad greens of the canopy are missing. The branching dark umbers, rusts, and siennas and the blue-green-black backgrounds, along with the swirling vortex Mandala motif, hopefully draw the viewer’s vision into the forest mystery. The viewer is in the undergrowth, the ground level where trunks, thick limbs, branches and vines swirl in their interpenetrating dance all powerful symbols of our unconscious, our DNA, our neural net, and our sinewy bodies themselves striving for the higher levels of illumination. And this quest is reached by the journey into the symbolic dark forest we each carry within and then beyond into the clearings ahead, where the light vibrates drawing us on.

Net Proceeds from art sale donated to the US and Indian NGO My Himachal: www.myhimachal.com [email protected]

Payson R. Stevens has had two parallel tracks in his professional career. One has been in the field of science/science communication; the other in art and design. He was President and Creative Director of InterNetwork Inc. (1979-99) and well as InterNetwork Media Inc. (1993-2004), both award-winning science/consulting groups with clients in government, industry, and academia. Originally trained in molecular biology at the City University of New York and in oceanography at the Scripps Institution of Oceanography, Stevens also studied at the Arts Students League and the School of Visual Arts in New York City. He has been involved with traditional and new media as an artist, designer, writer, and film maker for over thirty years.

Stevens was lead author of Embracing Earth: New Views of Our Changing Planet (Chronicle Books, 1992), which appeared in four foreign-language editions. He was also contributing author and artist/designer to the award-winning college textbooks, Geology Today (CRM, 1973) and Biology Today (CRM, 1971). His film credits include a CINE Golden Eagle Award (1980) for a national Public Television broadcast script on Antarctica. From 1981 to 1995, Stevens and his company helped develop a series of sponsored Earth-science reports, brochures, posters, and multimedia projects for the major US science agencies (e.g., NASA, NOAA, USGS). These won numerous awards for design and writing in annual competitions (e.g., Society for Technical Communication, Graphis International Poster Annual).

Concomitant with his science/communication work, he has continued to do fine art in both traditional and computer-generated formats since 1970. His electrographic art was in many group shows in the 1970s and was published in the first book on this art form, Copy Art (Marek Publishers, New York, 1978). His computer art was featured on the SIGGRAPH 83 Art Show Poster and exhibited at SIGGRAPH (1983) and other group shows (e.g., White Light Gallery, New York City, 1987). His computer art was published in the book, Computer Images: State of the Art (Stewart, Tabori, and Chang, 1983) and is found in corporate and private collections. Stevens is currently painting/drawing in his studio in Del Mar, California, and during annual trips to the Kullu Valley, India where he lives part of the year with his wife, the writer Kamla Kapur. Recent Indian solo exhibits include American Center/US Embassy (September 2009), Government Museum, Chandigarh, (October 2007) and the Nicholas Roerich Museum Gallery, Naggar (October 2006).

Stevens helped pioneer the field of interactive multimedia starting in 1987. He produced and directed ten acclaimed educational CD-ROM titles on Earth-science and environmental subjects, two of which debuted at the Smithsonian Institution’s 1995 ‘Ocean Planet Exhibition.’ In 1994, InterNetwork received the Presidential Design Award for Excellence from President Clinton for the CD-ROM science-journal prototype, Arctic Data InterActive, the first time this honor had been given for multimedia work. Stevens is also an accomplished public speaker and has presented at numerous conferences on the environment, technology, and design.

Since 2000, has advised on environmental, sustainable livelihood and ecotourism issues for the Great Himalayan National Park (www.greathimalayannationalpark.com). Stevens is a founding member and Board Advisor of My Himachal (www.myhimachal.com), a US non-profit an Indian NGO. Formed in 2006, it is dedicated to uplift the lives of rural Himachal Pradesh villagers and protect the environment.