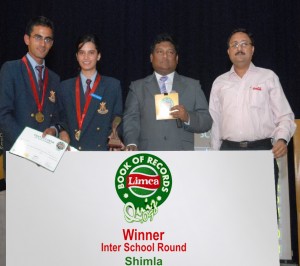 Shimla: Army Public School, Dagshai today won the Shimla City finals of Limca Book of Records Quiz 2009 held at Convent of Jesus & Mary High School, Shimla. The young geniuses from the winning school, in Shimla would now compete with the winners from 74 other schools in the Semi finals.

Not far behind, Dayanand Public School and DAV Senior Secondary Public School emerged as the 1st and 2nd runners up respectively during the Shimla City final of the National Quiz.

Following the huge success of Limca Book of Records, 2008, this year the quiz is being organized at an even larger scale to continue its journey of promoting knowledge and awareness amongst the young minds of the country. The quiz aptly takes its lead name from the Limca Book of Records (LBR) as the record book celebrates the outstanding achievements of Indians across the globe and is a source of inspiration especially for the countryâ€™s youth.

The multicity initiative has been launched in partnership with â€˜Know & Grow with Derekâ€™ and involves participation of young geniuses from class 8 to12. As part of the initiative, series of quiz competitions is being organized across 3000 schools across 75 cities divided into four zones â€“ North, South, East and West. The quiz is being organized in three stages â€“ Inter-school level, Semi-Finals & National Finals, from April to December, 2009.

According to Arun Sharma, General Manager Franchise Operations, Coca-Cola India, â€œLimca Book of Records, now celebrating its 20th illustrious year truly catalogues India at her best provides us with the opportunity to learn about the achievements of Indians and an opportunity to engage with young minds with same enthusiasm. LBR Quiz is in continuation of Coca-Cola Indiaâ€™s vision to promote knowledge and awareness amongst the young minds of the country. And what better way to ignite young minds than to make them all a part of a quiz. We received an over whelming response to Limca Book of Records Quiz last year. This year we are proud to take this initiative to the next level by organizing it in over 3000 schools across 75 cities.â€

The Limca Book of Records Quiz, 2009 is open to all the students from class 8 to 12 who are above 12 years of age. The series has been classified into three stages:

In the semifinal round of Limca Book of Records Quiz, 2009, â€˜City Winnersâ€™ from each of the 75 participating cities would compete for the National final. The top 10 teams with a minimum of 2 teams from each zone out of a total of four zones will be selected for the National Final.

â€œKnow & Grow with Derekâ€ have, for the last eleven years, been making knowledge interesting and helping people and brands grow. This is done through various media. Television, live game shows, and the more traditional way of providing content for books as well as columns for various publications. Among the spectrum of content, which â€œKnow & Grow with Derekâ€ provides, is the world famous game, â€˜Trivial Pursuitâ€™.

Coca-Cola India refreshes millions of consumers throughout the country with an exciting range of beverages including Coca-Cola, Diet Coke, Thums Up, Fanta, Limca, Sprite, Maaza, Minute Maid Pulpy Orange, Georgia, Georgia Gold, Kinley and Kinley Club Soda through a network of more than one million outlets. The company has invested more than US$ 1 billion in its Indian operations, emerging as one of the country’s top international investors. In addition the company’s business operations also engages approximately 1,50,000 people in India.